I just got this progress update regarding the artwork I did for TPK games for the Jirak Thoole Metal Miniature- while not PERFECT, it is pretty damn cool to see a metal sculpture of some of my artwork- here is an overlay of the artwork from 2012 with the metal mini.  Also included is a photo of both of the minis they made for the project, the human form was based on another artist’s work for the cover of the Module. 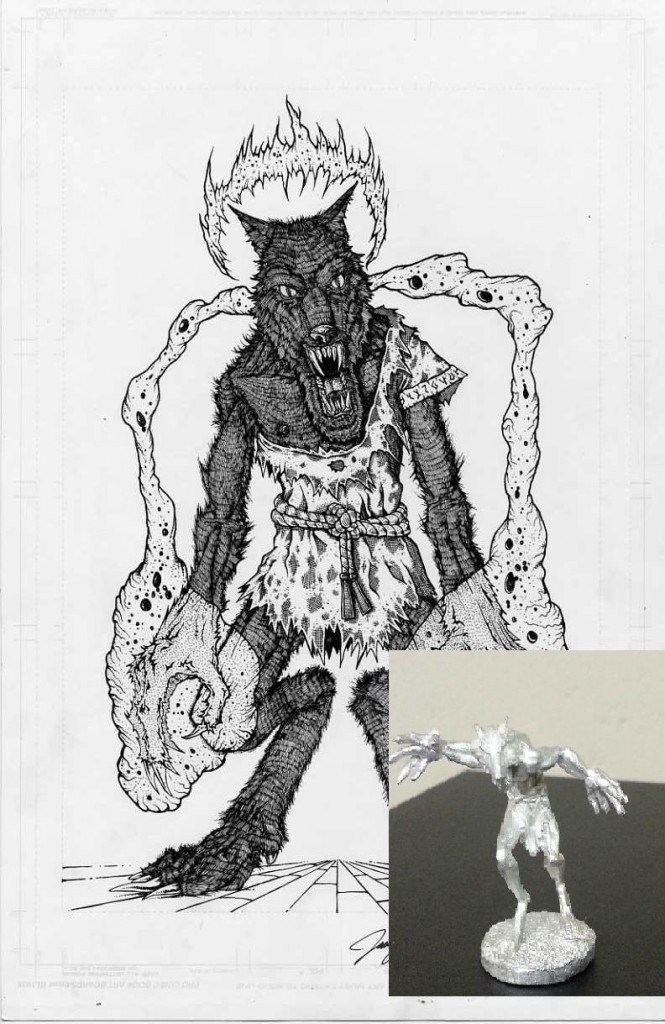 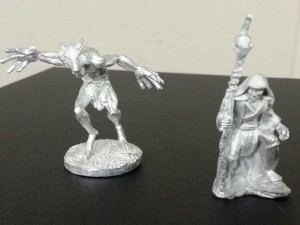 Another follow up to the “Bleeding Hollow” project with TPK Games- this is a shout out to my little dog, Loki, who helped out with my Gnoll Anatomy.  So I made him a general in the Gnoll army- thanks Loki- enjoy! 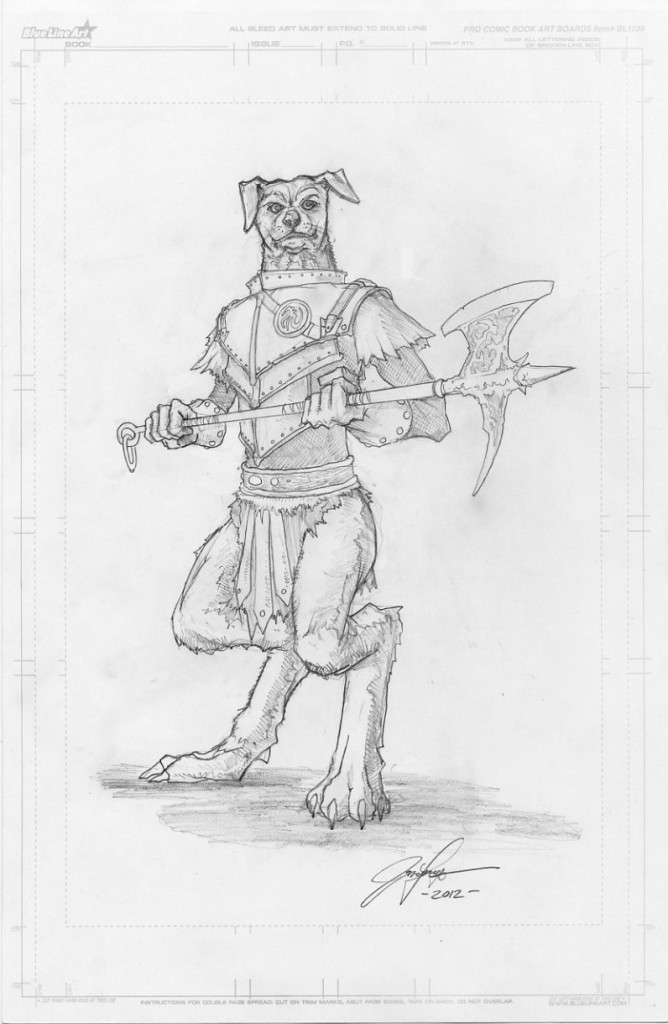 A small picture of the “General” of our Gnoll Universe… Loki! 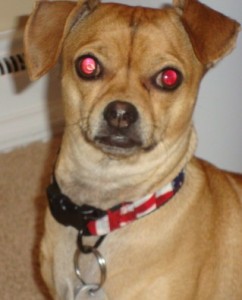 So this is a concept I’ve had for a few months with the “Bleeding Hollow” game module from TPK games- a werewolf in a woman’s body peeling it’s skin off like a glove.  I had originally made a sketch on the back of a flyer before one of my Tuesday night art classes (the teacher who doodles awful things…) and kept it for the last few months until I got done with our first 8 pieces, this sketch is under the finished pencil artwork below.  Now there are two nods in here to great horror films- the eyes on the werewolf are patterned after the head Vampire – Marlow –  in the Salem’s Lot 1979 TV mini-series, and the skin is patterned after the shed skin of the classic 1978 and 1993 remakes of the 1956 original Invasion of the Body Snatchers.  Both remakes had some really incredible practical effects of shed skin and people being shed like their skin was like a disposable glove, I really loved that look, and felt this piece really did it justice in pencil.  So enjoy this wicked piece of work, and a few nods to some great films! 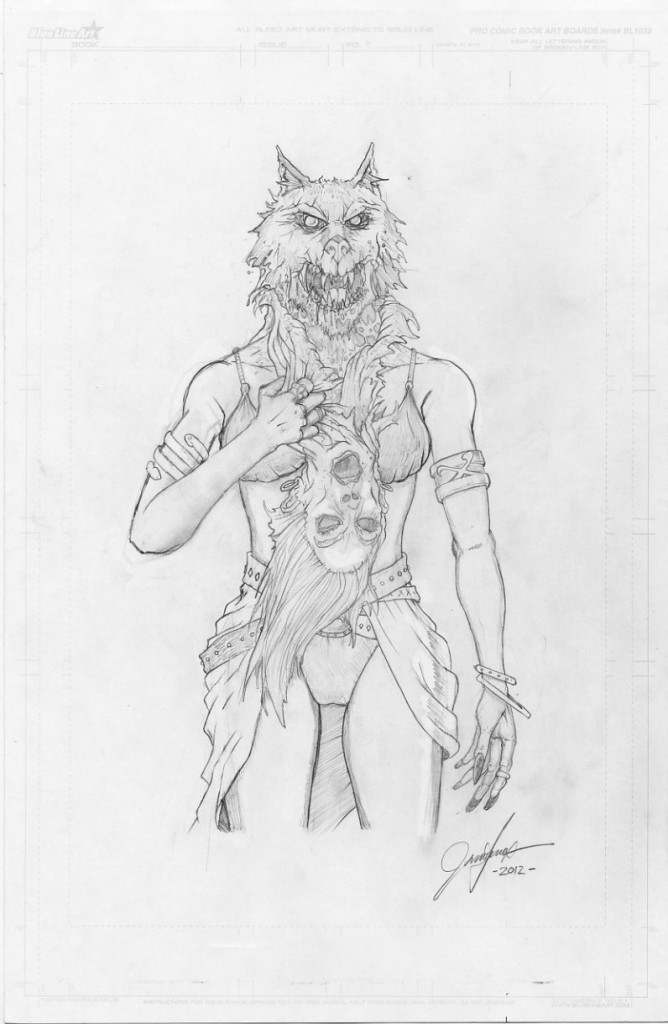 The big changes here from Pencil to Ink were the shortening of the second leg section to make “Iron Maw” more dog-like, and instead of the black hair on Jirak Thoole, the writers at TPK wanted this character to have red fur- so I made a new fur texture to let the color be a bigger part of the figure as opposed to just more black.  Overall this turned out to be a nice piece, and I think if you havent already, you need to support this on KICKSTARTER , so check out the fundraiser link and support my work, and TPK games! 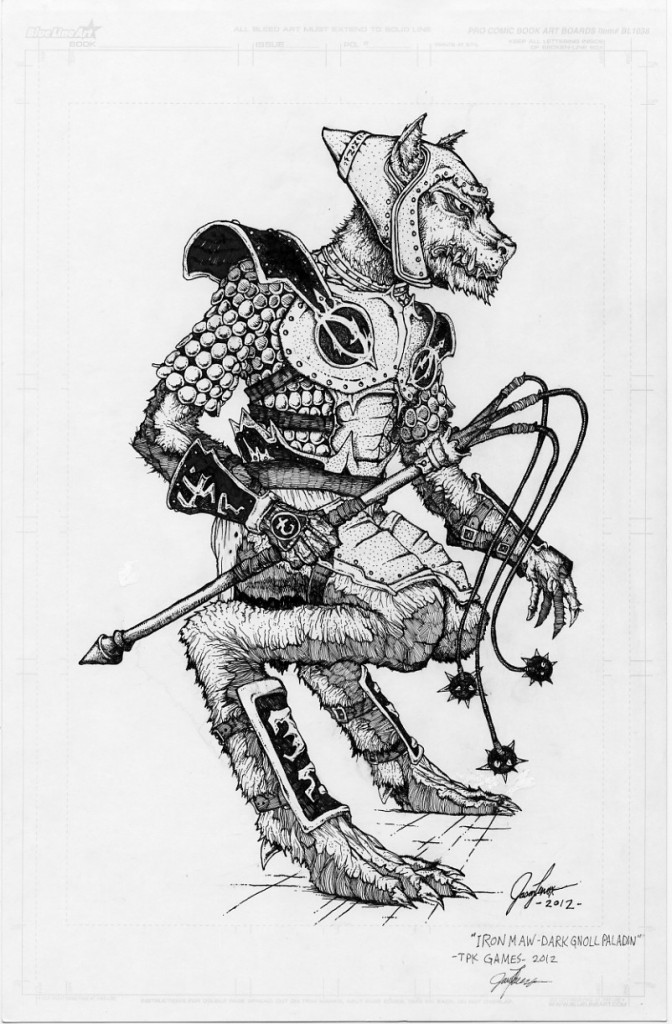 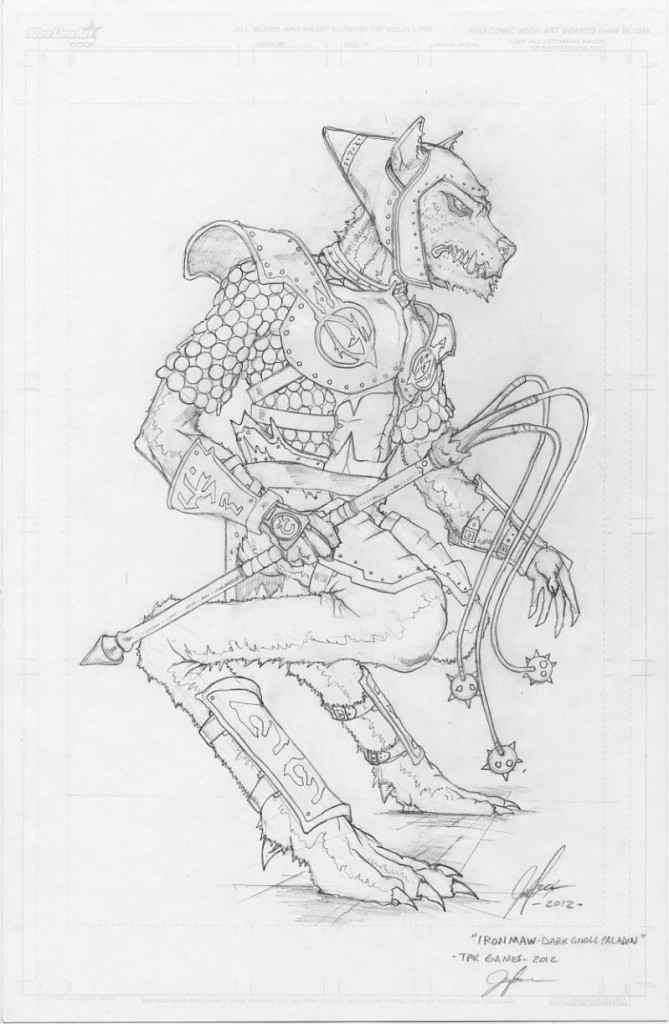 This is the pencil layout for the Dark Paladin Gnoll Villain: “Ironmaw” for TPK Game’s “Bleeding Hollow” module.  I worked to use the same sort of character layout for a primary villain like I did with Jirak Thool, but I rotated him about 30 degrees for a different view so I wasnt just doing two character designs from straight head-on for the same project series.  I had fun with the armor, per the publisher trying to make a “face” out of his chest and waist, I thought it was pulled off in a fun visual way, but also one that would work if was real armor.  I also played around quite a bit to get the weight and balance looking correct, I want this to look like the creature’s center of gravity makes sense so you wouldnt think “well this guy would fall over!”- I think I was successful on that count.  And with this project, I like to plug the publishers fundraiser on KICKSTARTER– if we get enough donated, this character might be a metal miniature! 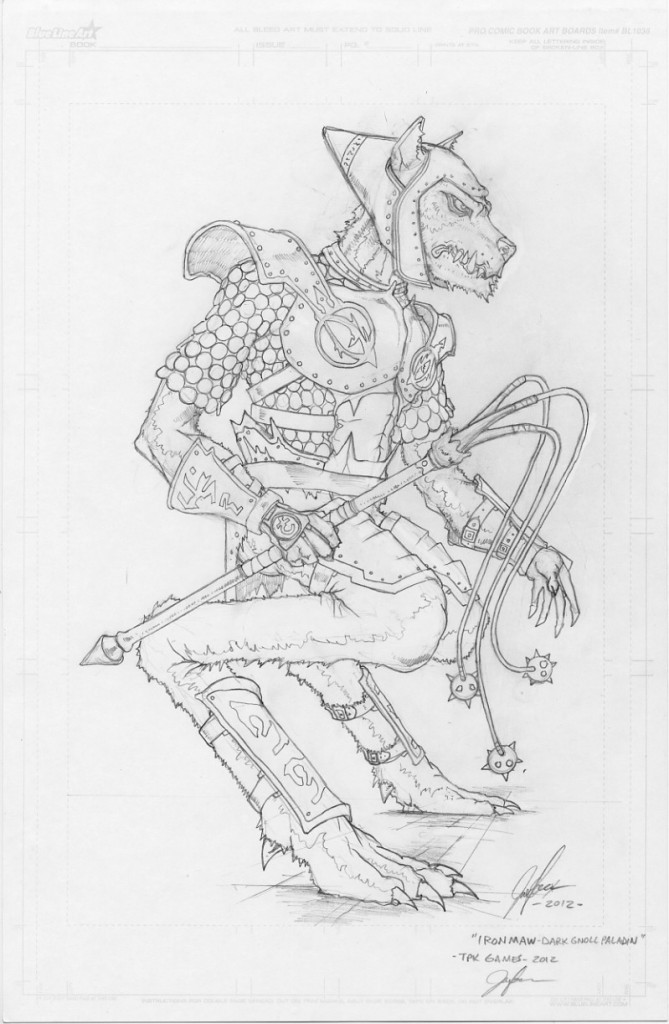 Sexy Slaves on leashes serving Human Heads to Dog Men at a campfire…  TPK Games is going all out to bring some disturbing images to the upcoming RPG Module “The Bleeding Hollow” and feed the bloodthirsty urges of their hard core gamers!  Some technical notes on this piece- the fire shadow truned out great with the shading, and I like the woman in the background, and the Gnoll with the leash looks like a classic Disney Villain, this was unintentional, but I keep seeing images of the bad dogs from “Lady and the Tramp” in his face!  Anyway, this is a classic bit of old school RPG art- support this project from TPK Games at their fundraiser on KICKSTARTER today! 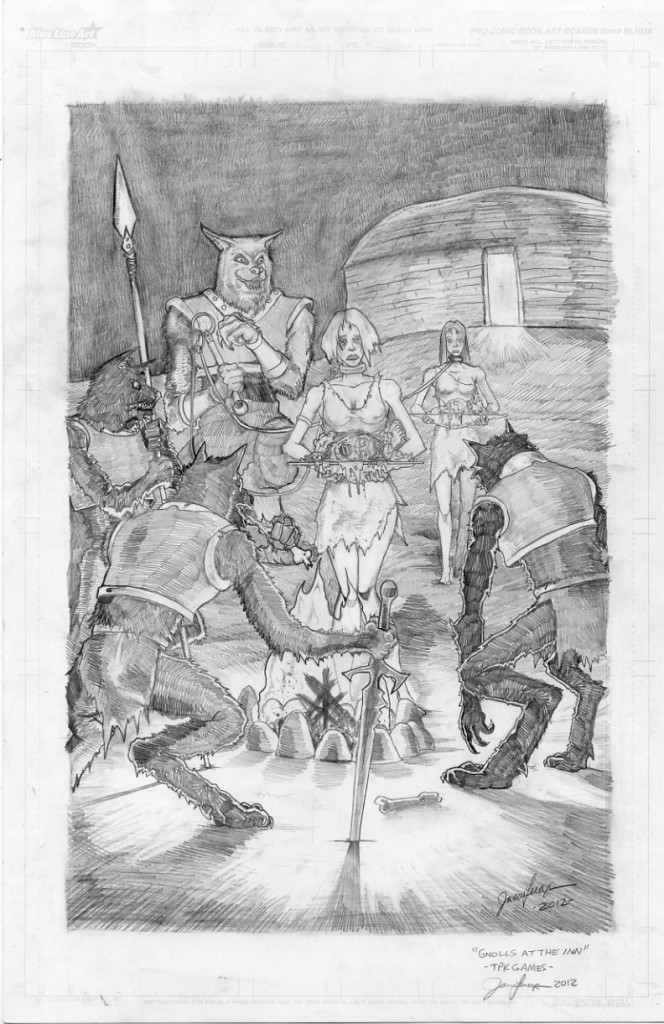 Another stylish bit of ultra-violence for TPK Games upcoming module: “The Bleeding Hollow”.  A fun piece to draw, and the requested pencil finish lent to the raw look in the picture, and some nice forced perspective lends to the urgency in the death that awaits the poor villager!  Help support this project on Kickstarter so I can do even more classic RPG artwork for this classic in the making!  KICKSTARTER for “The Bleeding Hollow”… 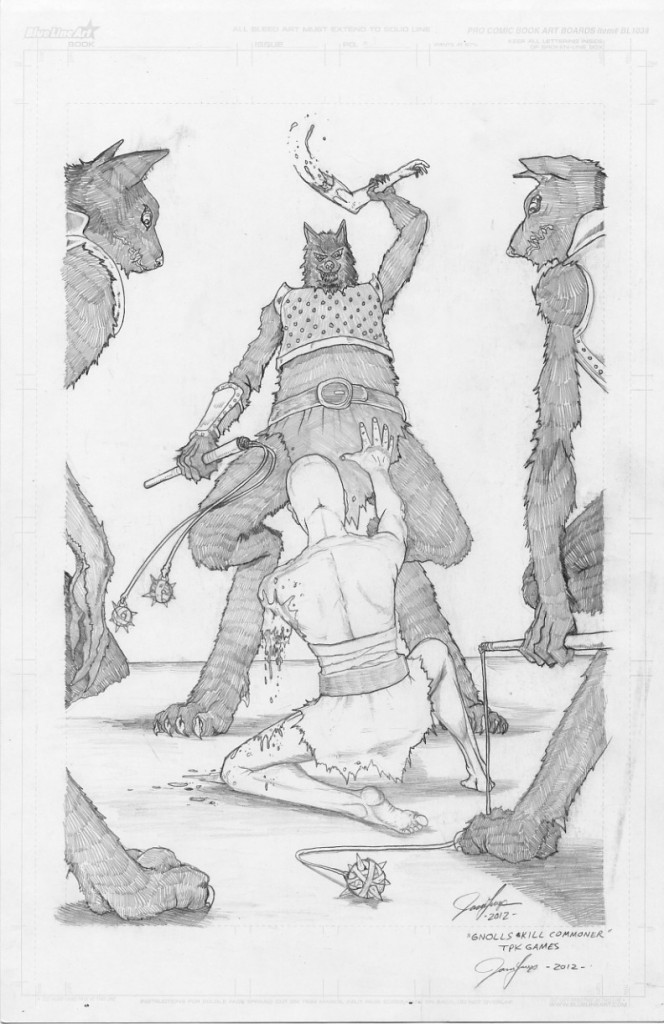 Some Classic Pen and Ink RPG art for the Arch Villain; Druid Werewolf, JIRAK THOOL.   This is one of the two main antagonists of the new TPK game module: “The Bleeding Hollow” , which you can support right now on KICKSTARTER.  I tried some new inking effects on his magic powers (the clear zones around the hands) as well as a “burlap” texture for the torn robes, I also tried to make a very rough “fur” texture on the hairy areas as well, all of these inking elements really turned out well in my opinion.  Again, I cannot thank my dog, Loki, enough for posing for the legs on this guy! 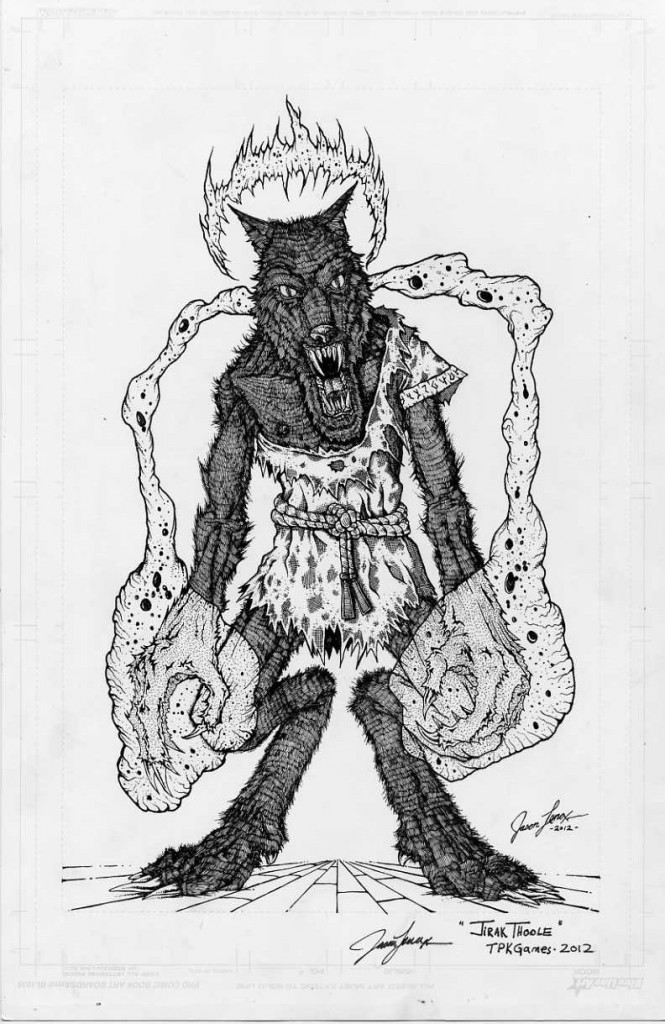 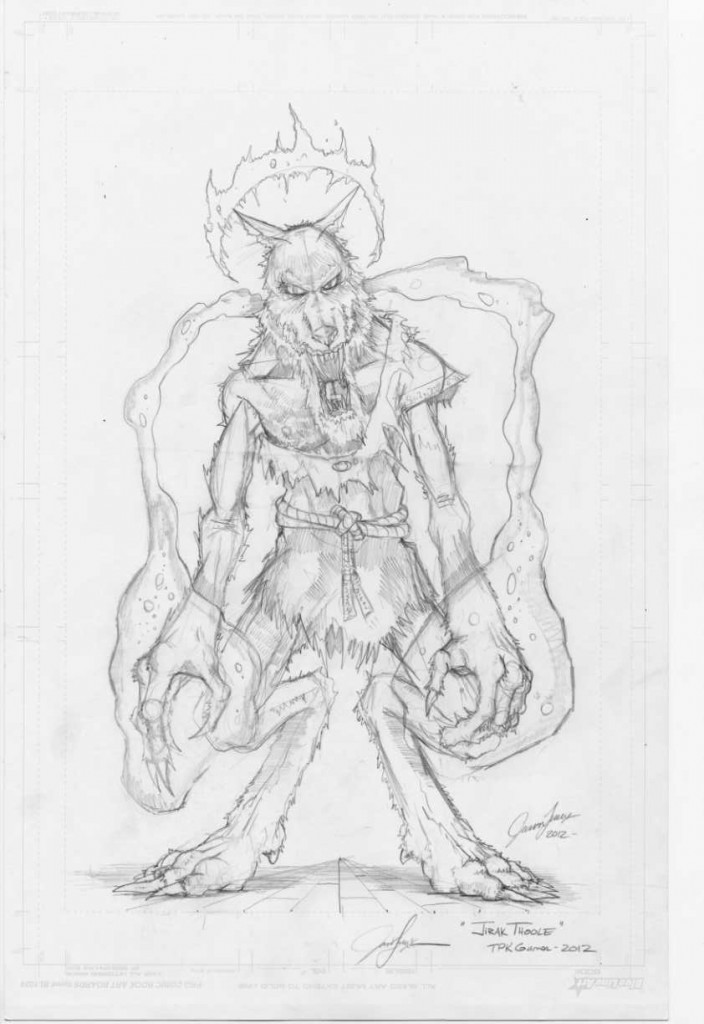 Dog Like Humans Called “Gnolls”, raiding and causing problems with, Dogs.  Lots of detail for this TPK games piece- 6 differently armed and armoured Gnolls and 3 attack dogs, lots of fun composition here in this pencil study that will appear in TPK Game’s- “The Bleeding Hollow”, and you can help support this game module at KICKSTARTER with a donation!  One of the tricky elements of this was the Gnolls all having the non human legs, they were tricky to get used to, and I’ve never done that many in one image, but I think they really added to the unique nature of this piece by making the characters very “non-human”. 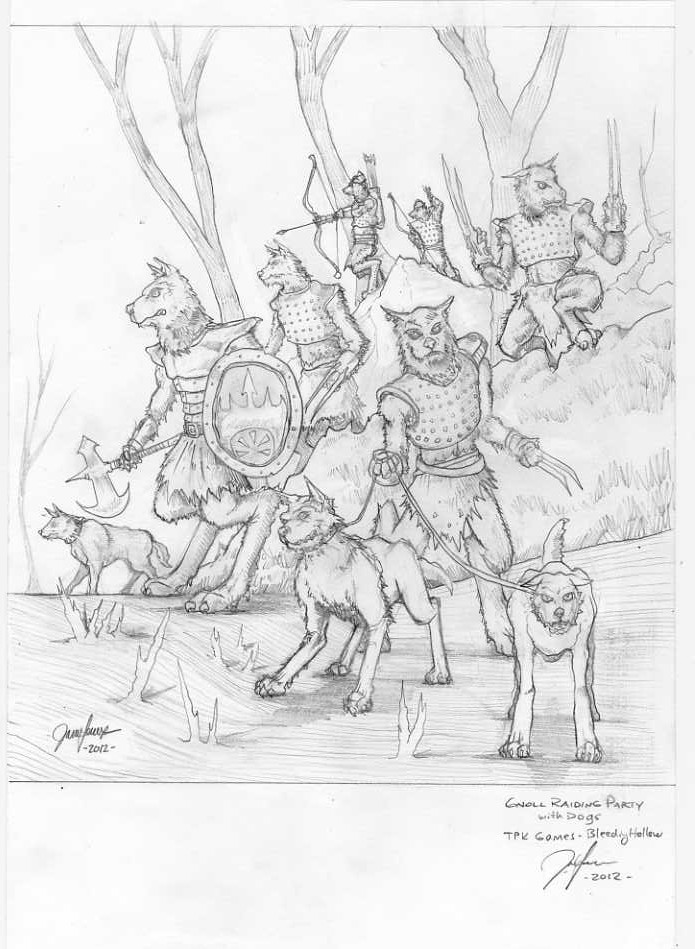 Pencil piece for the “Bleeding Hollow” Module from TPK Games- an Orge in mid transformation into a werewolf, neat stuff. I worked on the face being torn in half to full effect with the wolf coming out of the Ogre’s face as his skin tears apart for the wolf under the skin.  Check out the fundraiser to make this game module at KICKSTARTER.COM and support TPK games! 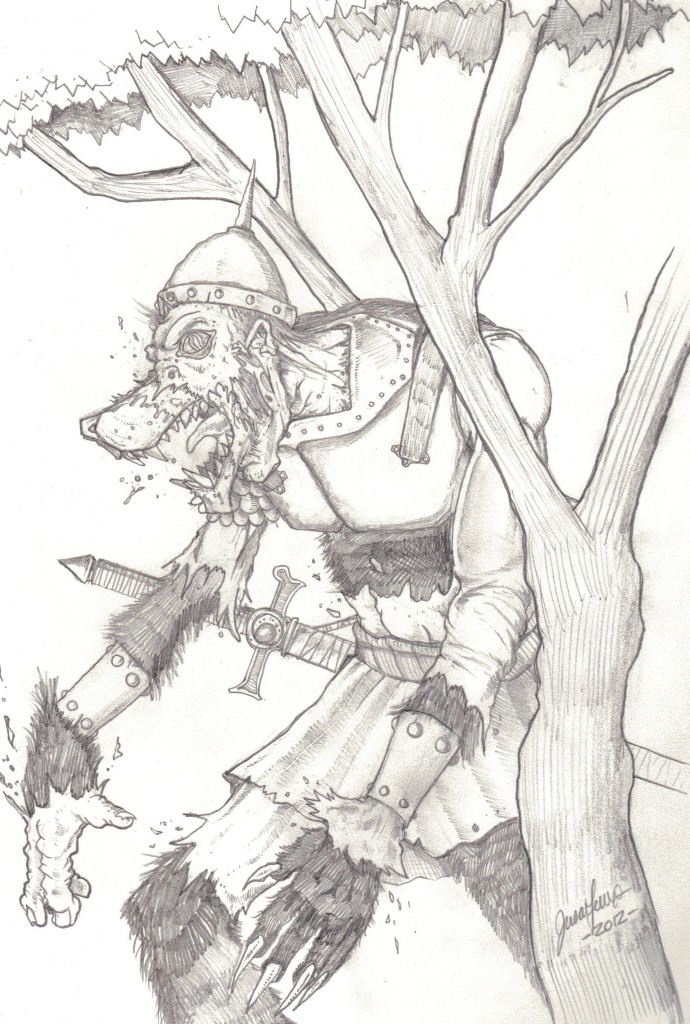