O.K… so this is something I get asked about frequently, and yes I do it when it makes sense… “Do you design tattoos?”… This is always a rough and slow process as the goal is to pull something out of someone’s head that isn’t necessarily an artist, but can “see” something, and like blind man’s bluff you are shooting darts to hit that imaginary target.

So this project was for a friend and fraternity brother, Dave Warden.  A few words on Dave- I’ve Known Dave for about 20 years now, and he has always been a great older brother for me- sometimes we have spoken and seen each other frequently, and sometimes not so much.  Also Dave has always been someone that would equally tell me I was wrong, as well as praising me when I was doing something right.  I can also thank Dave for about 50% of my technology knowledge, also introducing me to the Geto Boys (2000?) and South Park (1997?) as well as many beers, laughs and good times.  Pretty much, if you know someone like Dave, or as we called him “Sweet Daddy” consider yourself lucky, they don’t come along very often.  Dave was diagnosed with M.S. a few years ago, which was a real blow to me, since I have known Dave so long I hated to hear that he would not have the same quality of life moving forward, and I realized we were all getting old.

Anyway Dave contacted me about this project because he wanted to get a tattoo to show his dedication to fighting this disease.  Dave has always been a supporter & fan of my artwork since about 1993. Dave actually made a Mad Magazine style cameo in this 90’s fraternity tee shirt I illustrated here – Dave is driving the golf cart.  After our initial conversation about this project I got a real feeling that my return to artwork the last few years really made Dave proud of me, and I also got a true sense of his enjoyment watching me make so many new pieces and getting back to the younger artist’s dedication that he remembered before I stopped drawing which I reference in this post called “Hiatus”.  I get so much energy from positive talks like this, so once I had an idea of what Dave wanted last Fall- “A Broken Sun with a Smirking Face Surrounded by Tattered Flags”- it was time to get to work and get this taken care of for Sweet Daddy.

One of the things I found as I researched this issue (doing my homework) was that alot of people in the M.S. community get tattoos, and what a rough disease this is to have.  Losing control of my body has to be one of things that scares me more than most- other things being Sharks and Drowning that would rate in that category.  So while doing this project, I gained a healthy respect for Dave’s situation and the M.S. Community in general, and I knew that I needed to give the project the slow process and attention to detail it deserved so Dave’s wishes would be accurately drawn out for the tattoo artist to put this into his skin permanently.  Of course, tattoo needles and needles in general scare me, so yes I am a huge pussy.

Luckily- Dave loved the first draft, and there was a move to get more to the original sketch, which you can see I was already moving away in images 2-3!  The 7 images below chronicle the journey from step one- to final inks.  Along the way we had some adds, deletes and some happy accidents that Dave loved that I had no idea were in there- so that was awesome. When I do something like this, I abdicate about 80% creative control to the client, so it is a slow process.   I don’t always agree with what we (Jason and Art Client) are doing in a process like this, but unlike most of my projects I make I’m not the creative director.

Ultimately It is important that this is what the client is comfortable wearing on their skin, so they are the boss.  I can say that getting Dave’s final email simply commenting “Beautiful” made my day, another job well done with some killer artwork.  Thank you Sweet Daddy, keep up the good fight! 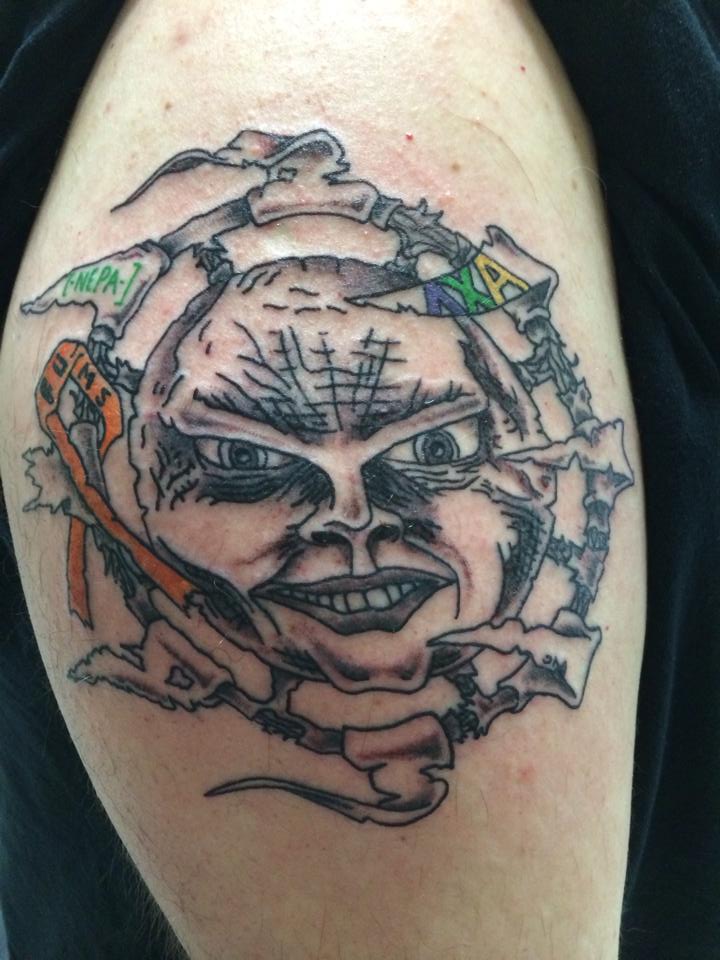 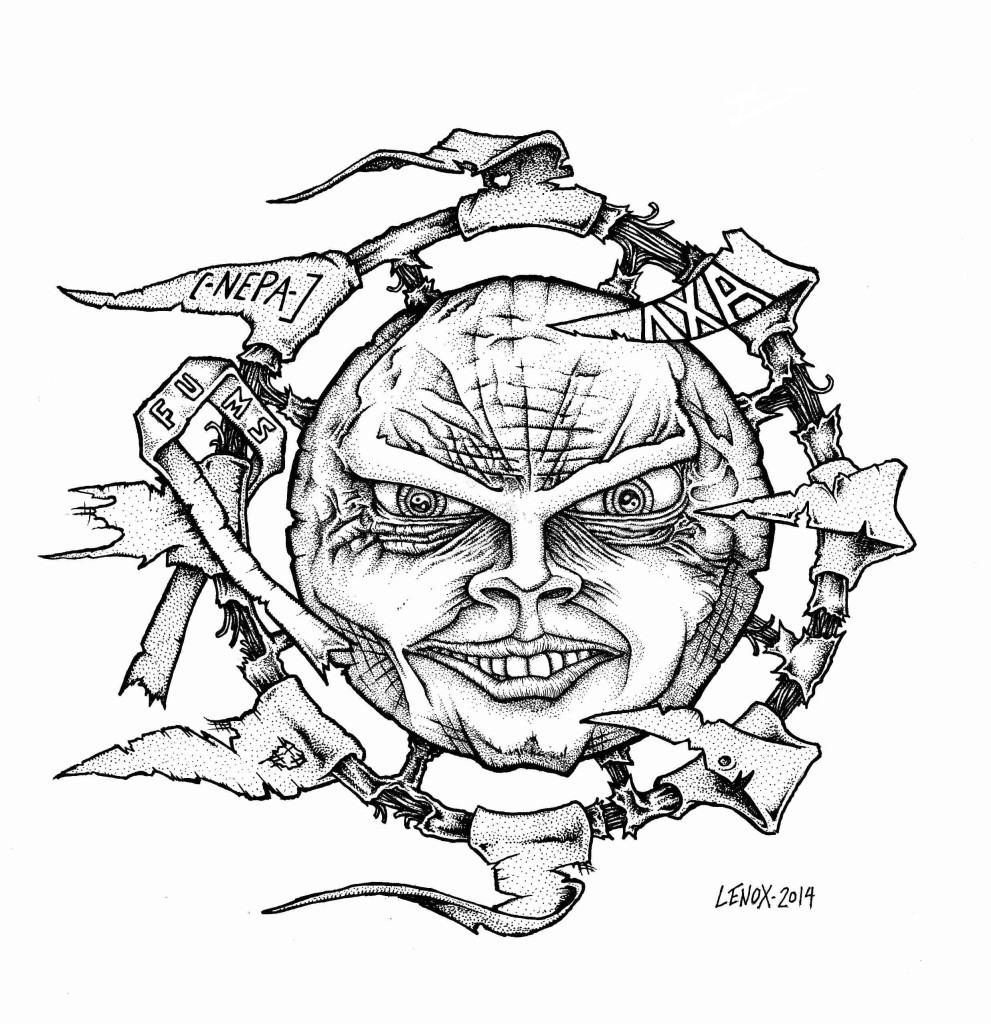 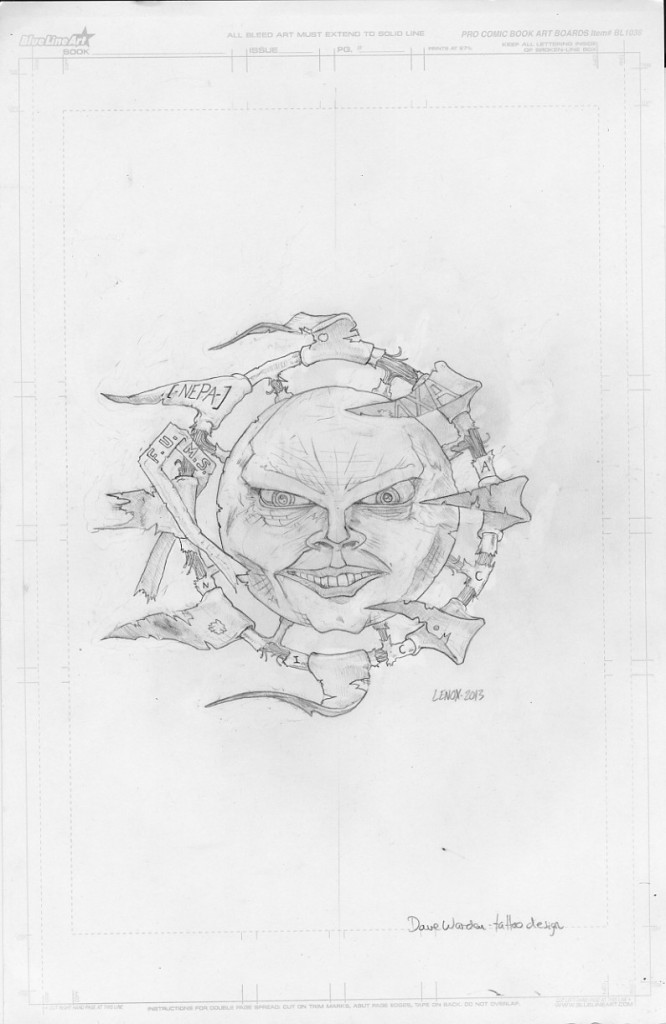 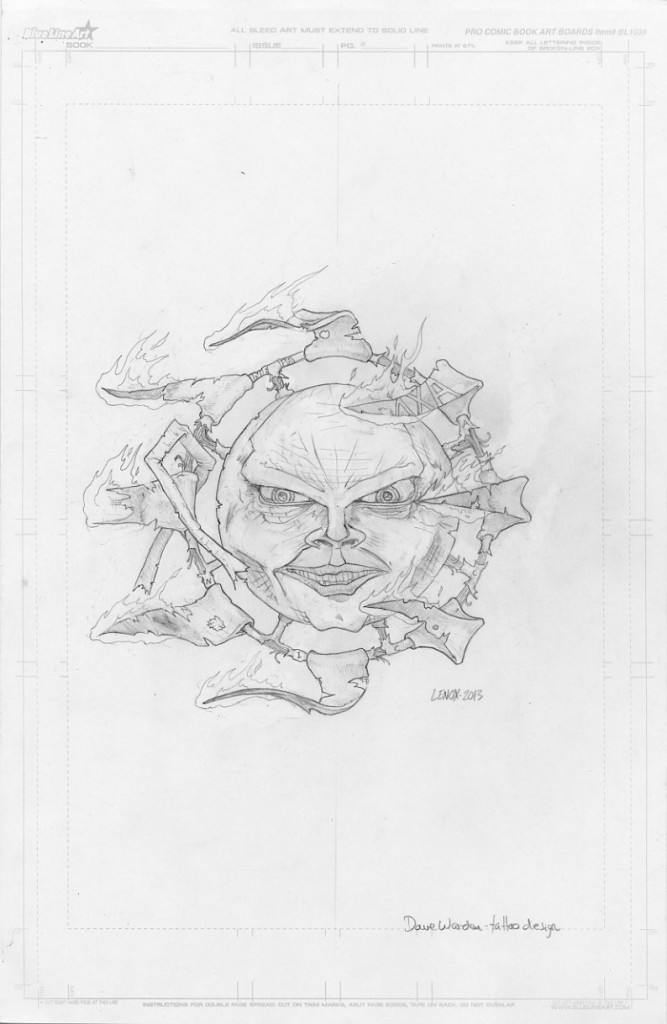 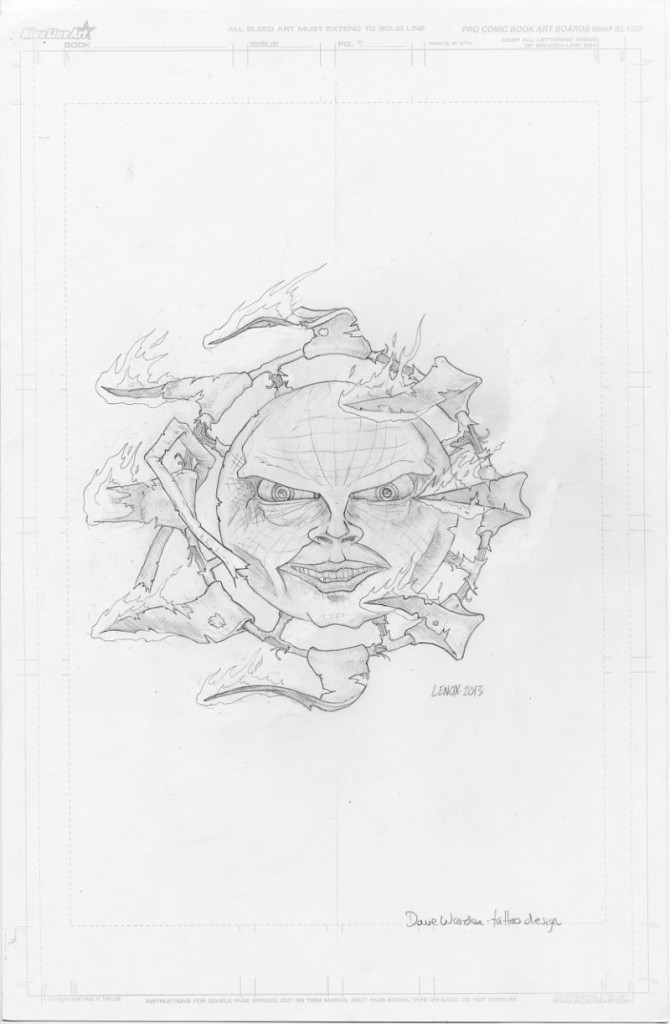 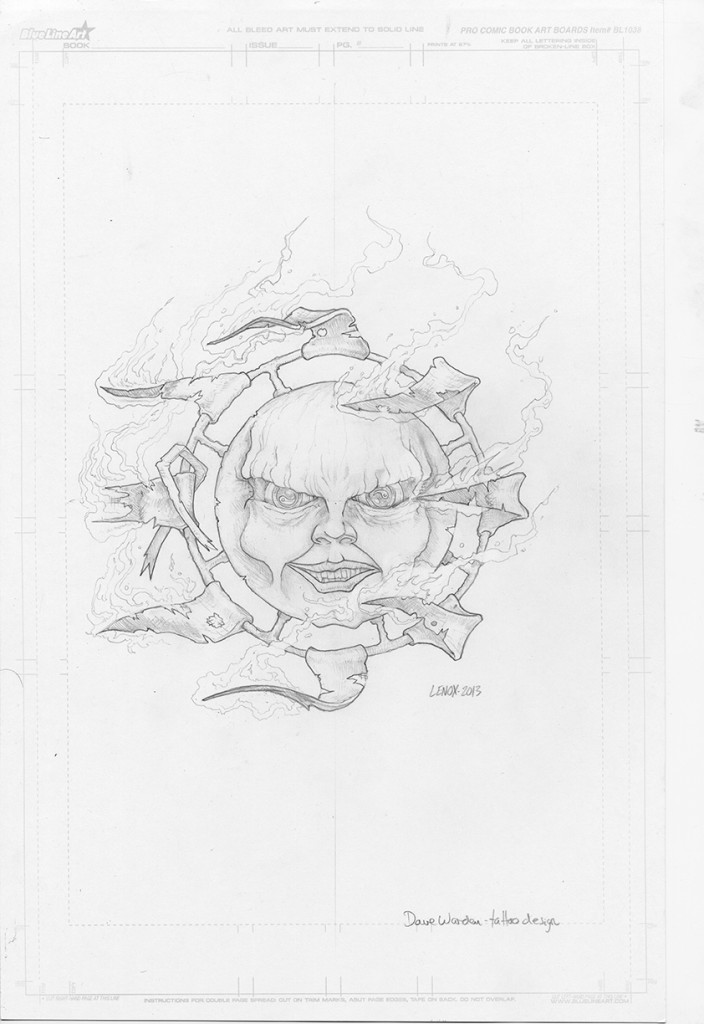 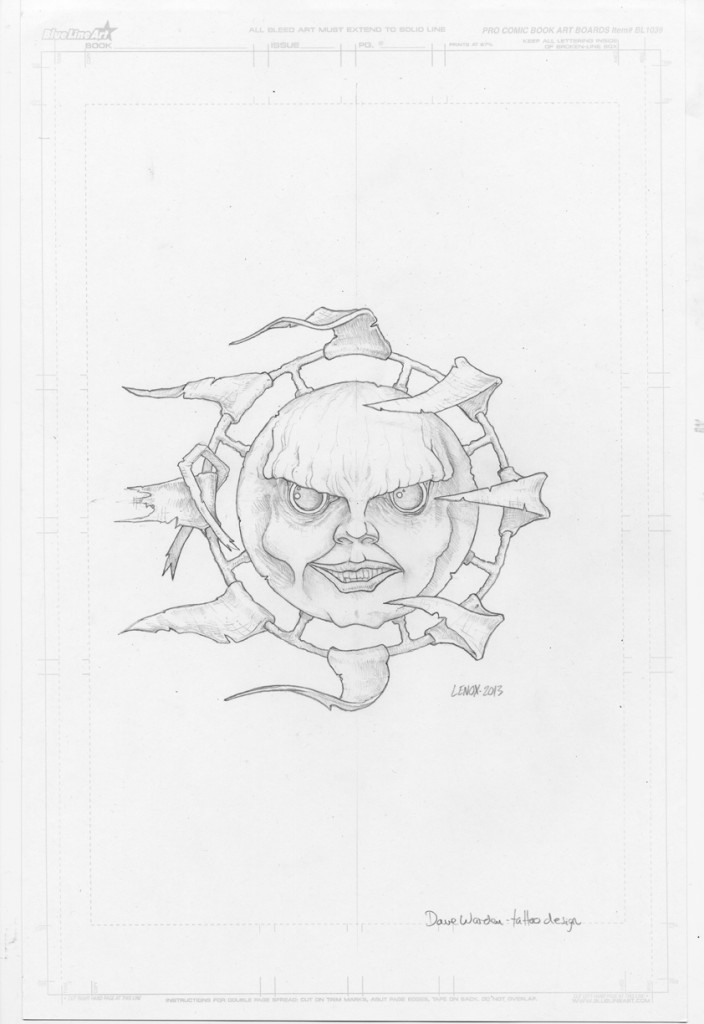 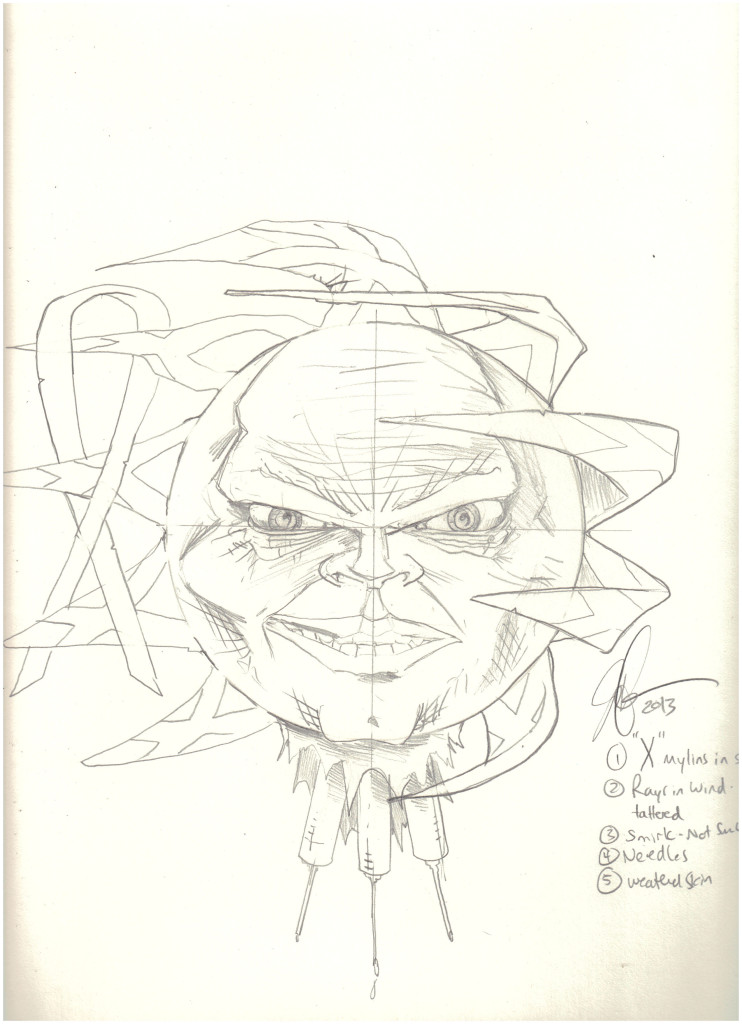