Conan and the Tower of the Elephant Pinup- Pencils

Conan the Barbarian- an epic character from Robert E. Howard and an iconic figure in American Artwork on book & comic covers and thousands upon thousands of pages of printed comic books.  Unlike my last series of pinups (Dr. Who Villains) where there is little art to compare to- Conan is an epic order to fill- Frazetta, Buscema, Smith, Alcala, Chan, Boris are just some of the classic legends to tackle and succeed with this Barbarian from another age and time.

The biggest challenge when facing this kind of historical comic character is what I’ll call the “Nord Barrier”- and by that I mean Cary Nord- super artist in general that re-launched this title with Dark Horse several years back.  What impressed me with Cary’s work was that he made his work original and “re-made” Conan all over again  with a fresh style that was unique, as well as beautifully rendered.  I think that Cary pulled this off was made all the harder with so many great artists doing the same thing for decades.  He managed to make the Nord Conan a unique look and feel despite so many hurdles to being original.  So I felt if I were doing a Conan piece I had to make it mine and not a knock off of say- Buscema’s or Frazetta’s etc. and thus cross the “Nord Barrier”.

So I took my favorite Conan Story and made my image of two paragraphs from Tower of the Elephant– it was a challenge from the changing poses of the Main character- Conan, and the Spider- below are my 4 steps to get to final pencils.  Here is the passage I took my cue from…

It was as large as a pig, and its eight thick hairy legs drove its ogreish body over the floor at headlong pace; its four evilly gleaming eyes shone with a horrible intelligence, and its fangs dripped venom that Conan knew, from the burning of his shoulder where only a few drops had splashed as the thing struck and missed, was laden with swift death. This was the killer that had dropped from its perch in the middle of the ceiling on a strand of its web, on the neck of the Nemedian. Fools that they were not to have suspected that the upper chambers would be guarded as well as the lower!

These thoughts flashed briefly through Conan’s mind as the monster rushed. He leaped high, and it passed beneath him, wheeled and charged back. This time he evaded its rush with a sidewise leap, and struck back like a cat. His sword severed one of the hairy legs, and again he barely saved himself as the monstrosity swerved at him, fangs clicking fiendishly. But the creature did not press the pursuit; turning, it scuttled across the crystal floor and ran up the wall to the ceiling, where it crouched for an instant, glaring down at him with its fiendish red eyes. Then without warning it launched itself through space, trailing a strand of slimy grayish stuff.

And now that you have read the text I based this on- I present the pencils, and layout and thumbnails that led to the final pencils.  Lots to do here before I get it complete, but a project to be excited about!  Did I cross the “Nord Barrier”? Well dear reader, that is for you, and not your humble narrator to decide!

*Note- the top scan are some edits I made after the “final pencils” I got some amazing crits on this piece from some killer artists (who asked to remain nameless) and I was able to give Conan a boost, to look, well more “Conan”.  So the first scan are the Conan Specific Corrections, and then the main scan is under that – it was done about 48 hours prior.  I like to share as much behind the scenes stuff as possible so I wanted to show this part of the process pre inks. 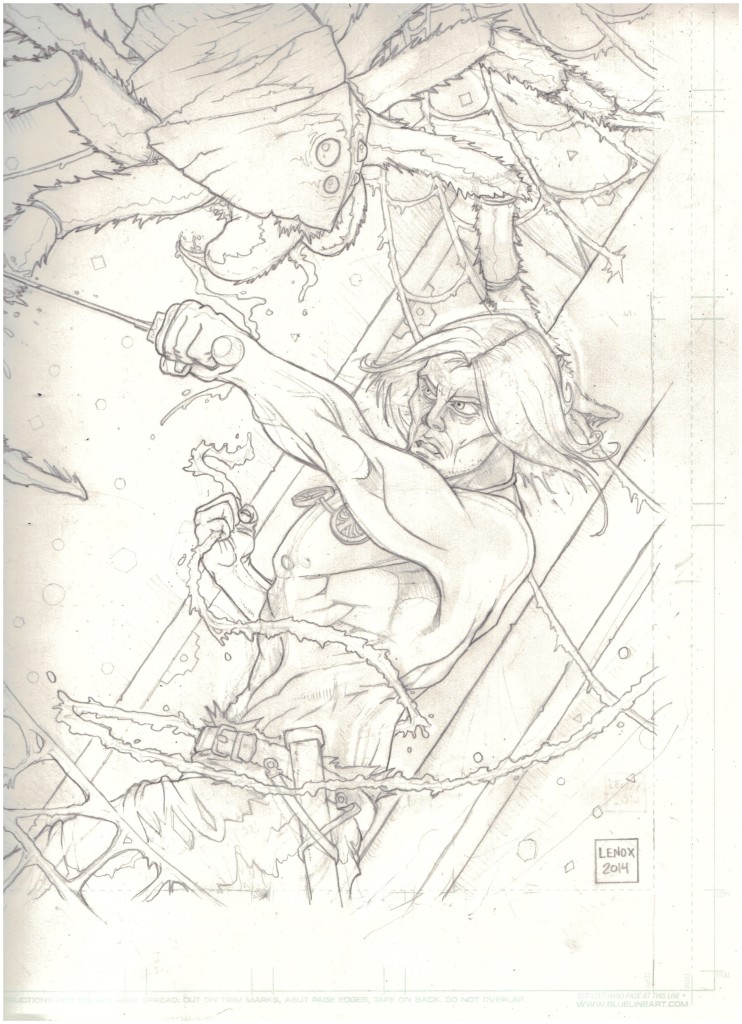 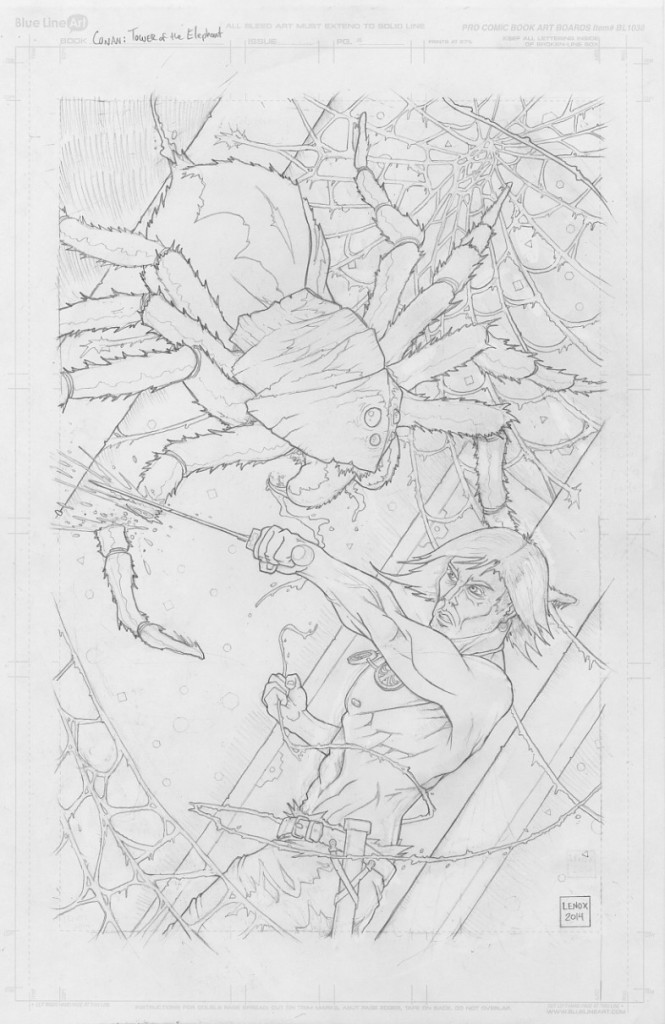 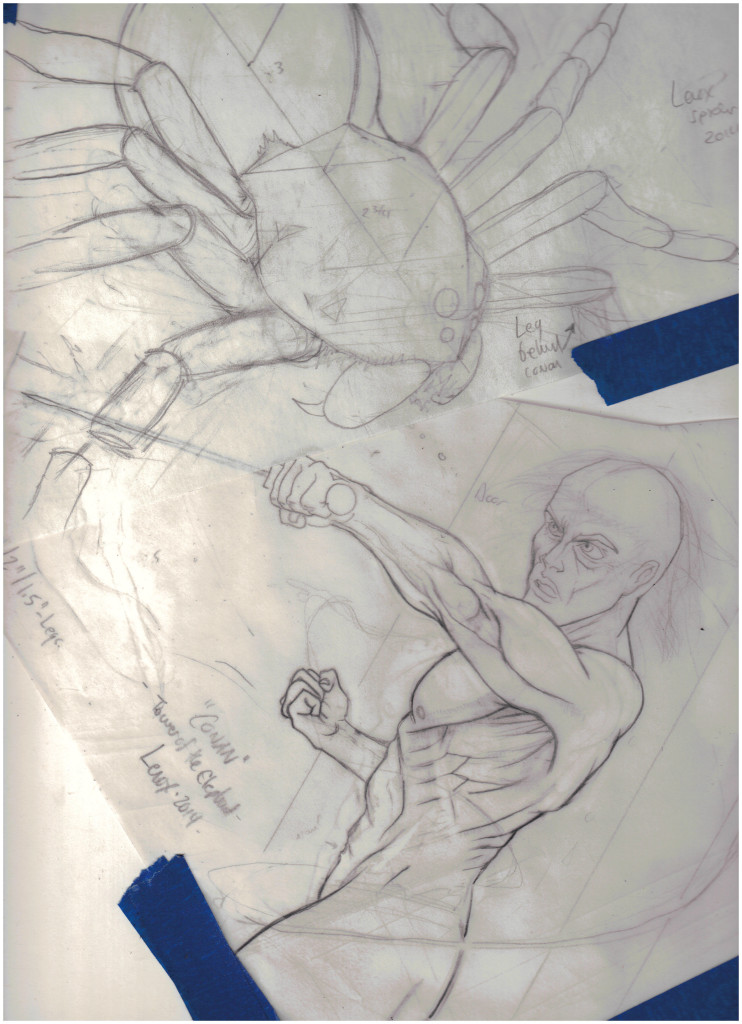 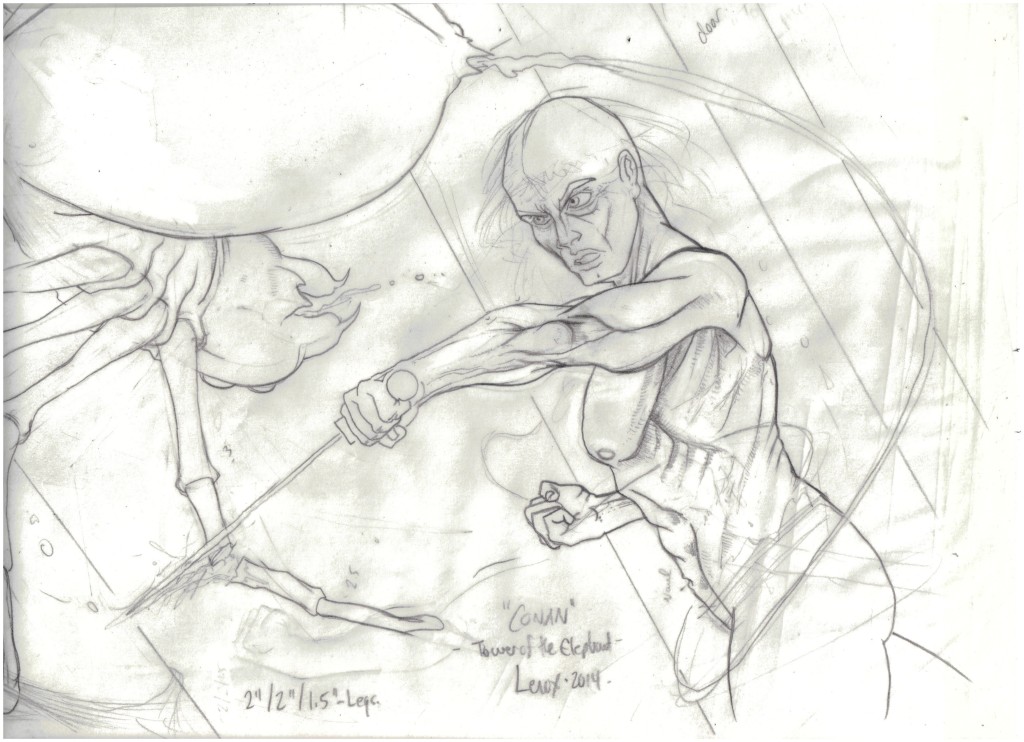 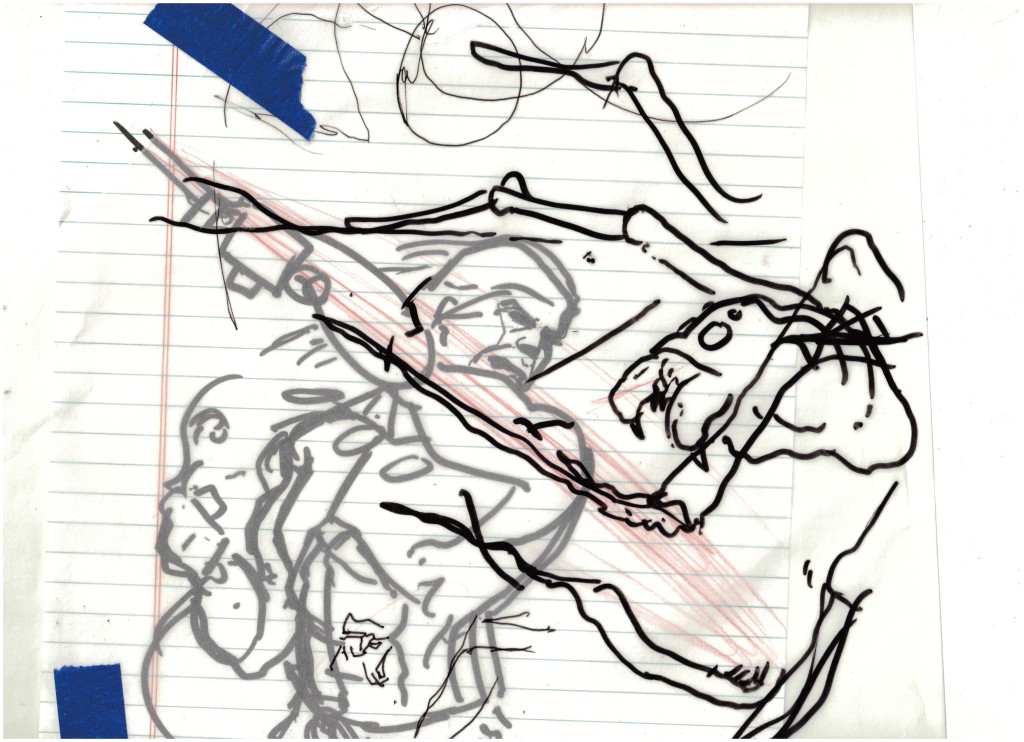