A defiant surrendering Elijah and a pinup re-intro to the villains  who have been pulling the strings  bring us full circle to a set up for the last 4 pages of the story…. basically a setup page for the reader to take a break before the final act.

This page really ended up being a great way to show a cocky surrendering Elijah, head down at an angle with his hat obscuring his eyes… giving attitude even in surrender… and I love the gun in hand mode- he’s out of bullets, so there isnt much to do now, but he wont drop his gun.  The other panel is the pinup pose that Jessica and Sheriff needed- they didnt get one yet outside of the cover, and I wanted her to look sexy, angry and psycho in one glorious pinup closeup with the Sheriff to really showcase them before the end in a larger shot.  I tried for a “Billy Idol/Sid Vicious” scowl on Jessica’s lips to go with her crazy eyes as I tried to give her a 9/10th profile view, unlike the mostly front on views we have gotten of her to mix it upa little bit on her look  (a tip from Zoe at FFGames about my women) , and I also made sure to cross elements by having the Sheriff and Jessica overlap (thanks Jeff Lavezoli) .  Also I really wanted to show the Sheriff’s obese size as I worked towards having him as my first “big” person character with a good deal of body fat- (thanks Darren Auck).  So three pointers from three pros came into play on this one- thanks everyone!  I think this page worked to re-introduce my main villains and show a surrendering and wounded (defeated?) Elijah Holman- how can he get out of this?  Read on in a few days as more updates come in to find out! And thanks to my wonderful wife Crystal  for the hand modeling on Jessica’s right hand, I needed an immediate hometown assist on that one to get it right! 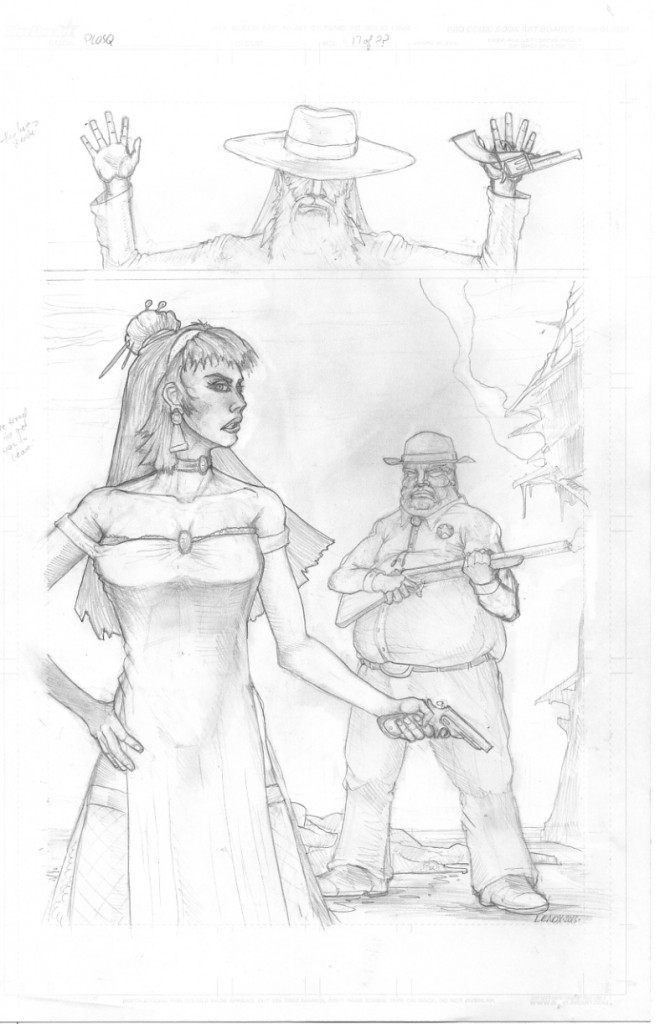