“This is a Sad Comic” Pencils

Writer Brendan Hykes and I have been plotting a one page high concept (read snobby) “Zine” style comic for a while now. Brendan is a writer that I met two years ago, and is one of the nicest and cool people I’ve been lucky to meet doing conventions. You can read more about him here .

So, what is this project?

Sort of like an art house film about people smoking cigarettes, doing heroin and suicide, but with wacky characters and product placement.

This is the penciled page and the final comic will be in Ugli Studios Presents #3 as a one pager near the end of the book. Inspired by two particular “artists” that drive me nuts (ask me in person for the dirt- it’s funny) and one head scratching convention that was the apex of this very independent and not easily accessible style.

I’ve been itching to put it to paper for a while with Brendan’s writing magic, and I needed to take a quick break from the “Lords of the Cosmos” to clean my palette with something a little bit lighter and fun as I gear up to tackle the last 10 pages of that particular project.

It was fun to do something that masquerades as “high concept” but really is just juvenile and insulting on several levels to a great many people. Of course, someone may see it and analyze the deep thinking and layers of meaning they see in it, then the joke is on them, this is a SAD comic, not a SERIOUS one! 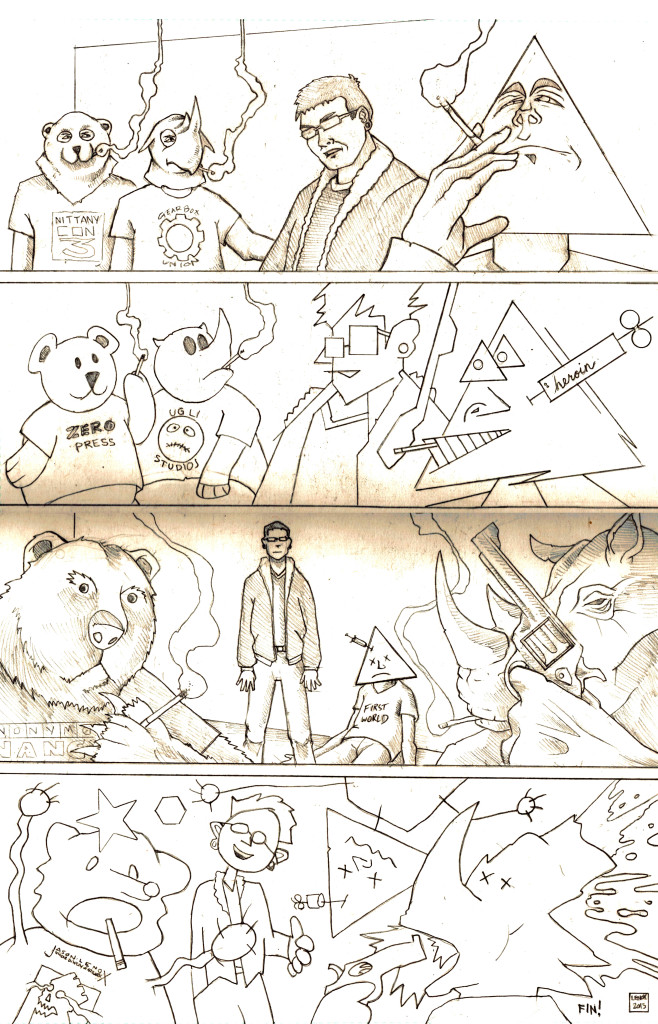