LORDS OF THE COSMOS: Aegeus and the Lords of the Cosmos Pinup #7 – Final Pencils

LORDS OF THE COSMOS: Aegeus and the Lords of the Cosmos Pinup #7 – Final Pencils January 14, 2015 jlenox
Lords of the CosmosPencil WorkSequential WorkUGLI studios
0 Comment
So more Lords of the Cosmos- the final set of heroes as I wind down all the character design/intro pages. This has their two pilots- a Mantis and a flame thrower equipped sparrow with a helmet, and finally, our local hero “Greenman” who passed away in September of 2013. I had met Greenman at Sci-Fi Valley Con in Altoona,PA that year and he was absolutely crazy and a great person to talk to. I found out after he passed away that he had been doing hundreds and hundreds of hours of charity appearances for children all over the place- his motto was “it never hurts to help” and then I realized that he was indeed a true hero.
So the uninitiated can see what Greenman looked like in person- here is a photo of Greenman and I from 2013 when I did a sketch card of him.. 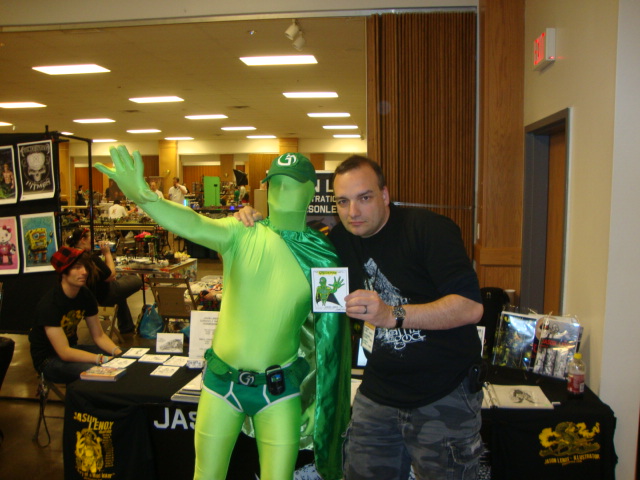 When we started working on the writing end of Lords of the Cosmos one of my scribbled notes actually was “need to shoehorn Greenman into story somehow” that writing process has been chugging along with Jason P. and Dennis for about a year now, and the Greenman “shoehorning” has taken a few twists and turns. Originally we had him as some kind of nature communicator talking to birds and mice, this morphed into flying the Lords of the Cosmos transport plane around as an ace pilot, and then we finally settled on a story arc that we love for his character that places him in a role where he is always helping out- the technician/mechanic for all of the Lords of the Cosmos’s various gadgets, vehicles and automated base fortress- Dragonspine Mountain. I wont reveal more than that, but there is an awesome story arc for Greenman’s character as this project unfolds. I kept his outfit about 99% the same, except I took his logo off the hat, and added his Lords of the Cosmos logo to his chest area for his team “branding”. And to show his mechanic skills, he is of course holding a wrench with his two cohorts and ace pilots – Mr. Mantis, and Senior Sparrow (no we didn’t come up with killer names for those two yet). Anyway, I can imagine if Greenman was here with us, he would totally pose with a wrench with me to act out the scene in this artwork, I can also imagine that he would ask dozens of questions about his two co-stars and why he got stuck with them and not the girl on the dinosaur- which is a fair question. Anyway, Enjoy, and stay green folks! 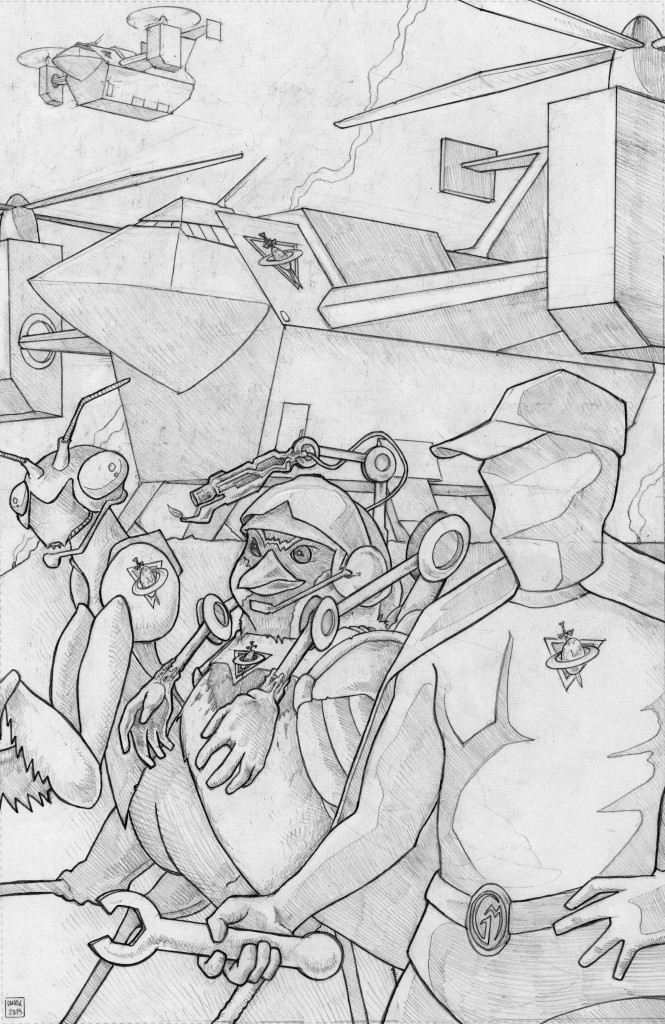