LORDS OF THE COSMOS: Disciples of Umex Pinup – Final Inks

The Disciples of UMEX in their first completed inked pinup from LORDS OF THE COSMOS . Soak up the 80’s toy inspired crew of killers… UMEX THE LEADER- “Poisoner of Worlds”, an organic lifeform designed to kill merged with a constantly adapting mechanized chassis designed to take over living creatures in close quarters combat….his entire body is in constant conflict while is tentacles infect any he touches with a slow agonizing death from his internal poison reservoirs.. .he oversees his personal cult/army “THE DISCIPLES OF UMEX” with unwavering devotion to the his ultimate goal the destruction of planet AIDEN… MORDANTIX- “The Living Vat of Acid” mostly machine barely human, this infernal machine fuels his internal engines by taking and engulfing his victims inside the large acid filled cistern his twisted cybernetic body is merged to for eternity, he moves along on large mechanical spider legs considered heavy armor support to the Disciples of Umex… MISTRESS ZEMBA “Murderous Seductress” Dominatrix Soldier to the Disciples of Umex, she laughs at the screams of the dying, waiting to skin the survivors alive. Zemba will use her Flesh Whip to flay her victims to death after she seduces them for any and all information to increase her Leader UMEX’s foothold on the power struggle he faces against the LORDS OF THE COSMOS…. SHREDTOOTH Soldier to the Disciples of UMEX Defilier of the oceans of AIDEN Shredtooth is dangerous underwater, or on land. His teeth are razor sharp and equally as dangerous his claws, dont let his odd body put you at ease, he is frightfully fast in close quarters in any environment. His head appendage is a natural light to lure victims in dark places to their ultimate end…. WE ARE THE DISCIPLES OF UMEX 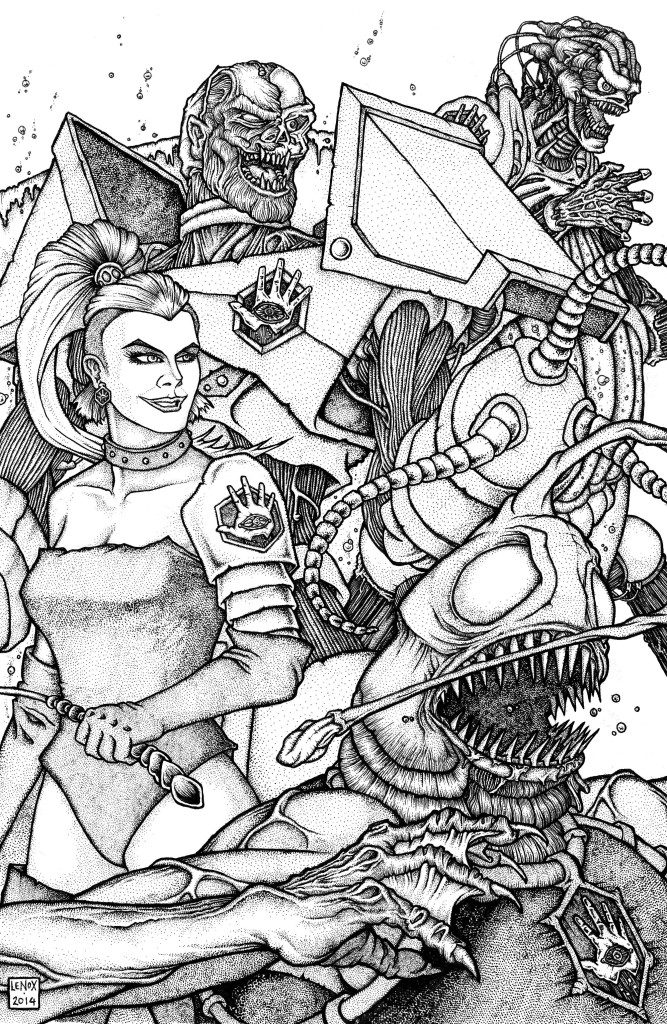 2 Responses to LORDS OF THE COSMOS: Disciples of Umex Pinup – Final Inks