CLARK “I don’t know what the hell’s in there, but it’s weird and pissed off, whatever it is.”

One of my favorite lines from one of my favorite horror and sci fi films of all time- the Iconic John Carpenter Film from 1982 “THE THING”.  As I have been making pinups for the last few months, I have been having a great time “visiting” different movies, TV shows and comics that I am a fan of, and getting to give OUTPOST #31 a visit was a long awaited place I’ve been wanting to go, and a place I wanted to take my fans to with some artwork that is beyond what you have seen for the standard fan-art for this property.  I made two small commission from this film in 2013, which just fueled me to do a full out THE THING project- those two pieces are also below with my full art process, even though they were small doodles, I really loved them!

Ive been a fan of this Film for about 20 years now, and I love the hardcore fan base which is online at their Outpost 31 website here, I hope that I can meet some of these good folks at a show in person soon!

This film has great acting, a great script, amazing music, creepy sound effects and could be one of the pinnacle films of practical F/X with makeup, models and even some stop motion.  With so many awesome scenes to pick from I chose the dog kennel which I have always thought was just amazing.  I was lucky to get a diorama of it as a gift from my Mom years ago, so I decided that was the direction to go in- make that scene from a new exciting angle in my style, but stay as faithful to the film as possible, without just copying a film cel.  Going with an over the shoulder POV with Mac (Kurt Russell) in the foreground I wanted his shotgun to lead the eye to a direct view of the dog thing with the transforming dogs on the outskirts.  I felt this added a real sense of excitement and urgency to the image by the composition to the highly detailed scene on the kennel floor.  I was really happy with the results- here is the clip from the film I based it on.

Film Ref. and Photo Reference- thanks to my Dad (Ron Lenox) and Dog (Loki Lenox) for modeling for me on this project!

And my two 2013 THE THING commissions from Baltimore and Cleveland 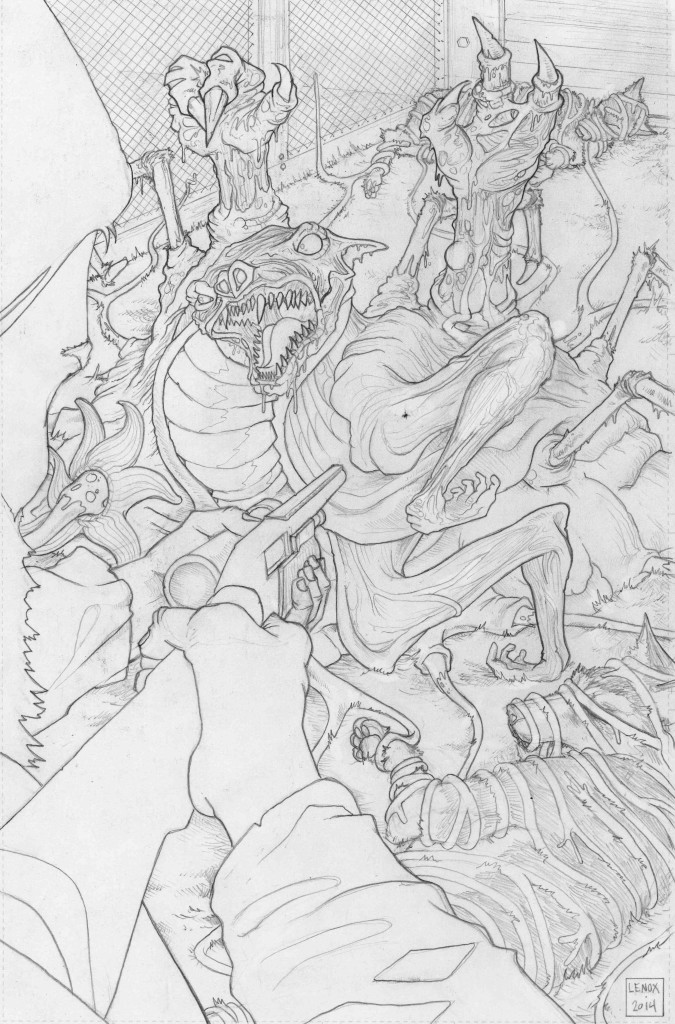 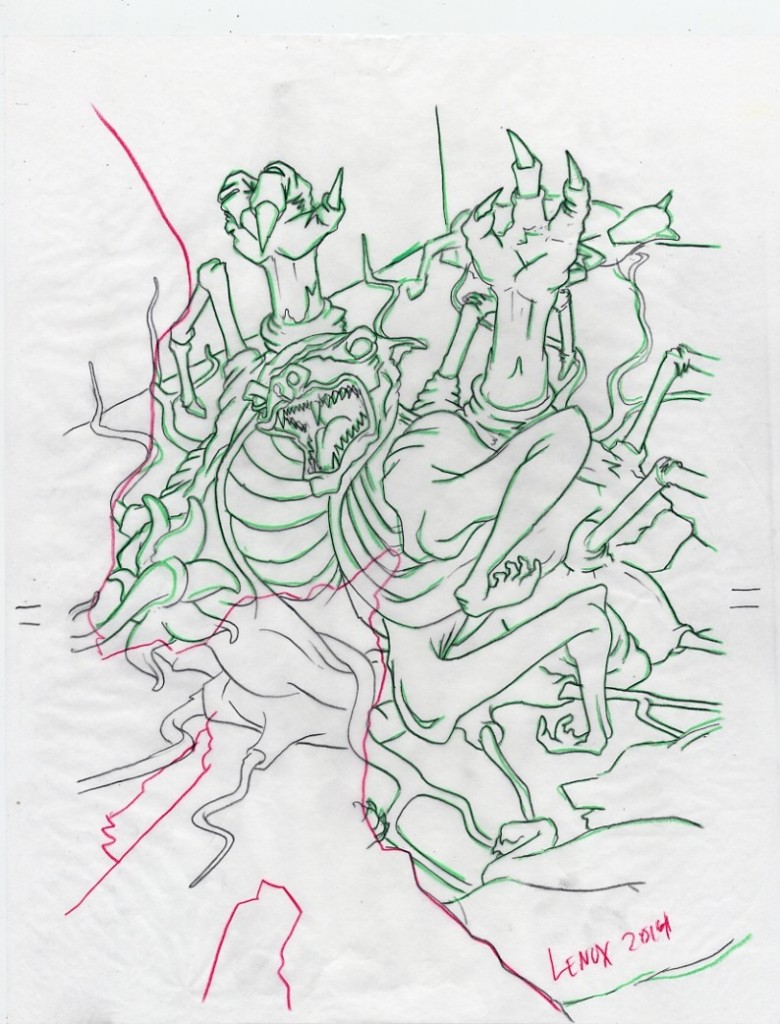 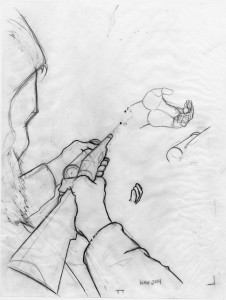 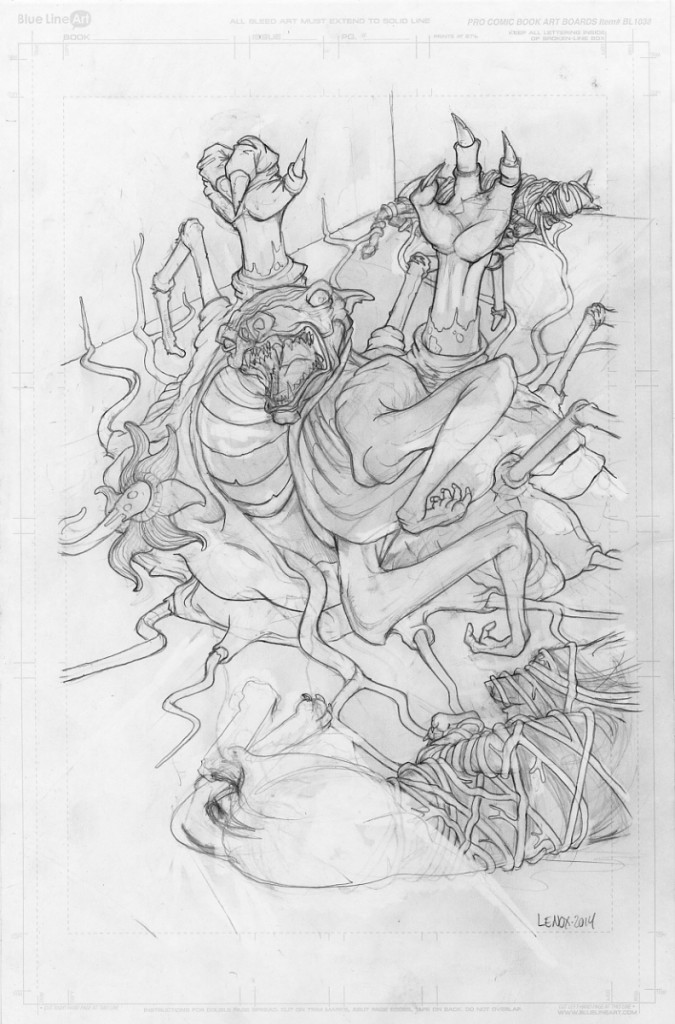 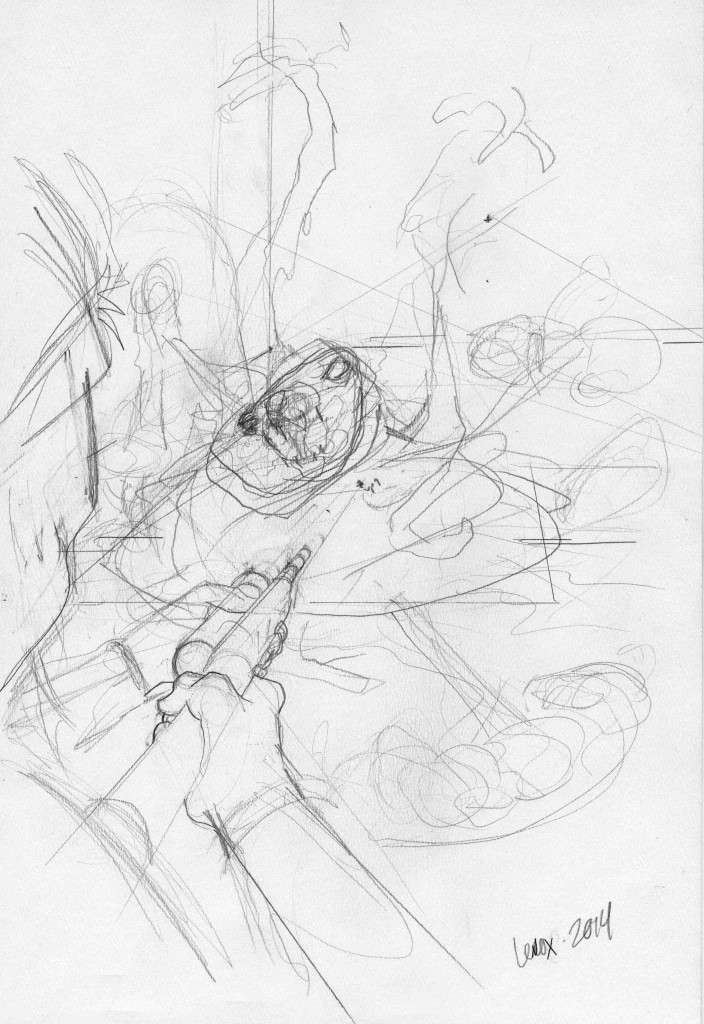 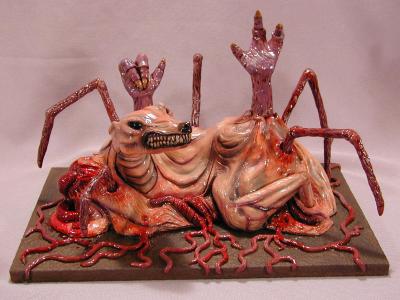 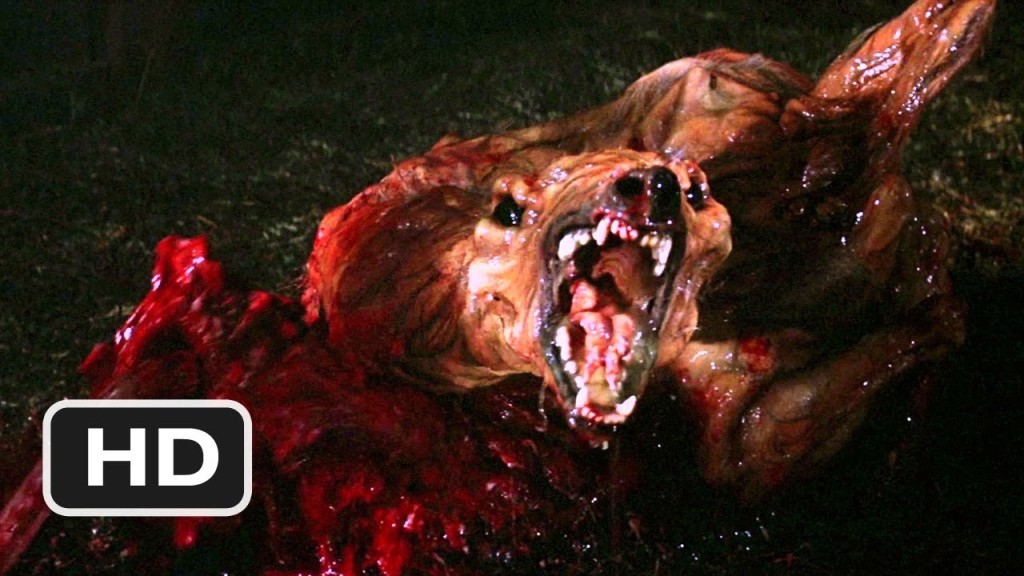 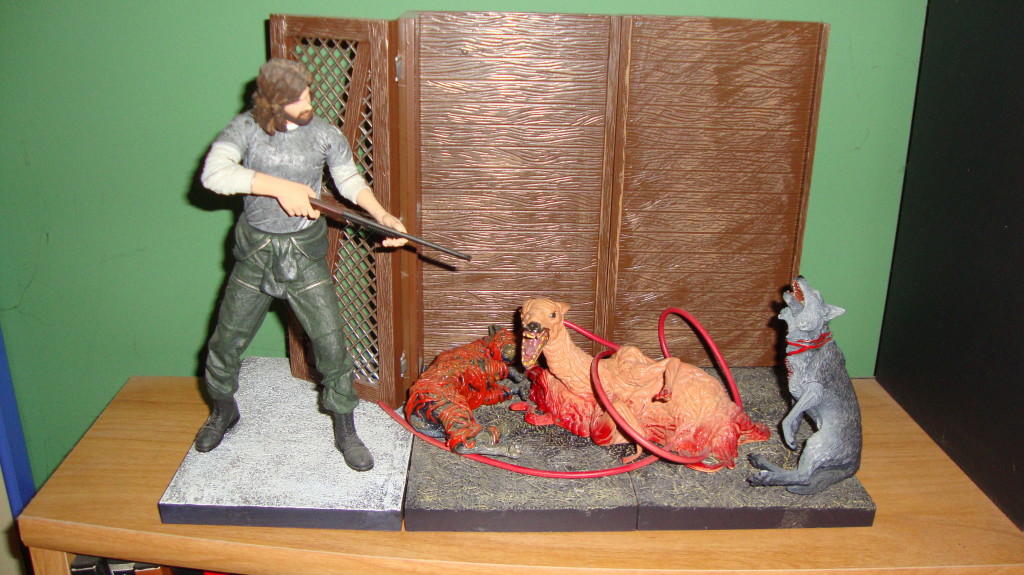 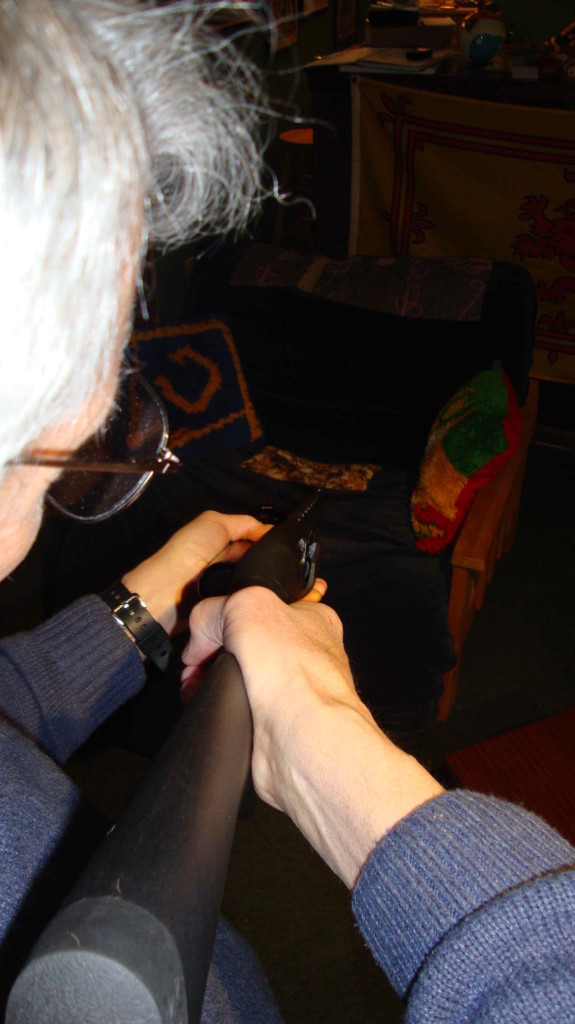 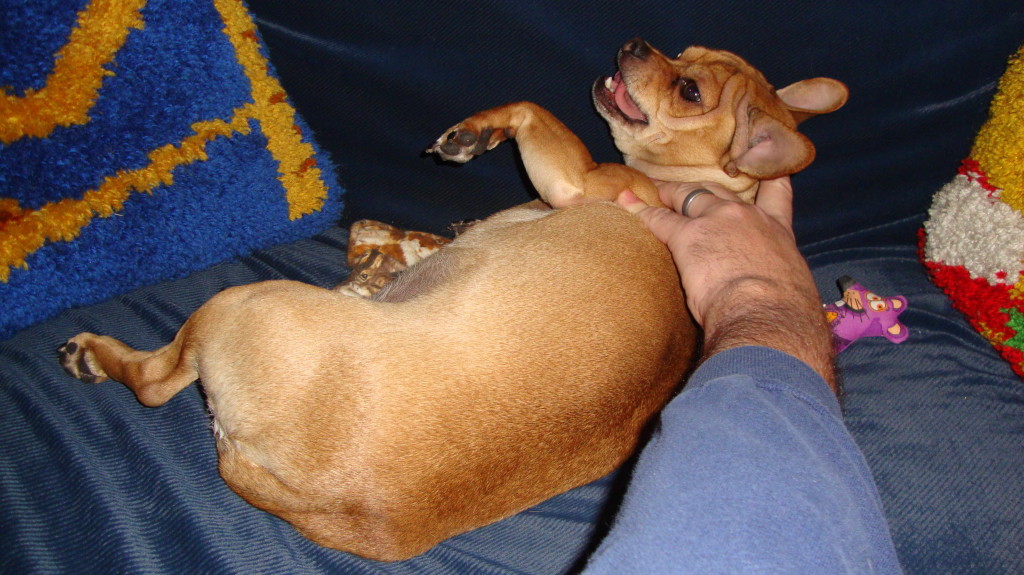 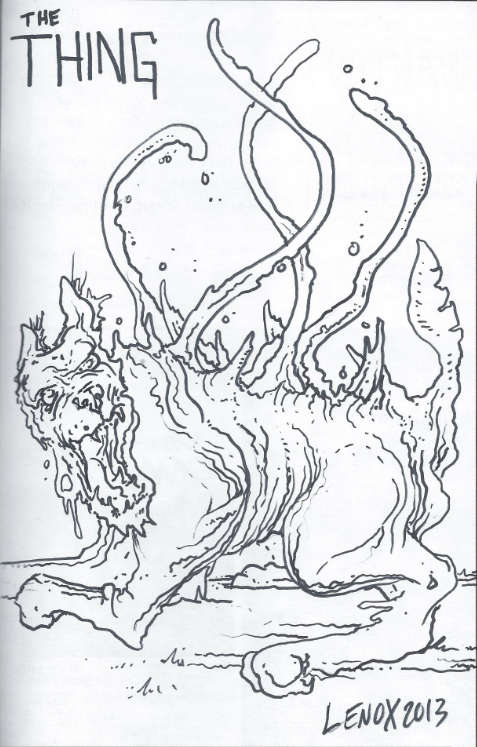 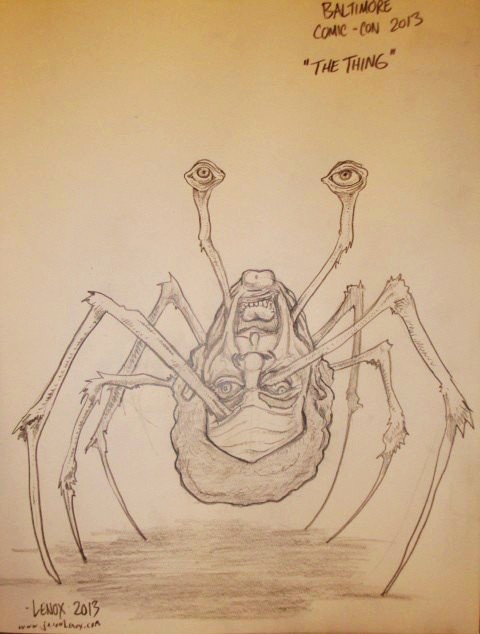