The Cyber Controller: We will survive.

This simple quote above from 1967’s Dr Who Episode “TOMB OF THE CYBERMEN” sums up this set of cybernetic villains.  They take over and make humanoids like them via use of forced surgery to cybernetic conversion to their army of Cybermen.  And if this sounds like the BORG from Star Trek- yeah, they ripped off the concept in the 80’s for The Next Generation 20+ years later.

So as a kid in the 80’s I loved these guys- for a few reasons, cool design, neat appreances with Tom Baker, wierd voice modulation and the paramilitary look and military structure appealed to my love of toy soldiers and war movies.  Of course they were supposed to be a cybernetic army that was also constantly converting new recruits forcibly into Cybermen, but again, this was mostly in your imagination.  Thanks to special effects limitations and cheap BBC budgets you only saw a few of them on foot at any given time on the show- moving slowly and barely doing much.  My love for them translated into two pieces of art in 1987 a logo from the show and a group of three Cybermen in a corridor- see below.  Which brings us to 2013- and my 5 Doctor Who pinups- this is the fourth of five.

1- The awesome anime of Dr. Who- Cybermen actually seem cool here and have a military force of attack ships and space cruisers, Ive cited this before- it was key to inspiring this whole project.  They understand what I wanted in Dr. Who!

2- 1967’s TOMB OF THE CYBERMEN intro to the CYBER CONTROLLER who kicks ass for the 60’s (see the quote above, and the cool voice modulation!) here

3- a look at Cybermen models over 45+ years here

4- A newer 2011 episode from Dr Who which has a little intro to the 12th Cyber Legion as a small aside here.  This showed them with ships and a military structure we never saw before, thus the name for this pinup.  This was like the Klingons in Star Trek the Motion Picture for a few minutes at the beginning, where you had this glimpse into a really cool environment for the villains you actually wanted to know about, but you as the viewer didnt get very much, and you were left wanting to know more.

5- Nazi tanks in Saving Private Ryan in this clip here  the last bastion of a rag tag losing army trying to make this happen on the run- of course the “bad guys” are still proud and dangerous even in defeat- and I love the powerful images of the officers looking out of the top of the big tanks as they roll in the background, so I lifted the idea.

1-Different models in the same pic- we never saw this on the show- and why not?  A rag tag army of cyber soldiers- why not mix ranks of old and new?

4- A vehicle/heavy weapon- and the impact they are a military force, and look like some kind of military organization, as opposed to a bunch of guys shuffling in a group.

All five goals are here in the piece- the 1966/1967 models from the show and some from the 2006-2010 episodes- the kneeling guy is like a sapper engineer opening the tombs and running the cybermats while the new model Cyberman runs point with a heavy weapon I made up so they looked like actual heavy weapon soldiers- I made it like a minigun, but energy based with a back based reactor.  Cyber Controller from the 1967 video clip is running point from the top of the tank like the German Officers in the Saving Private Ryan Tank attack video clip- note the tubes coming from his head (something I also added into the Cyber Controller that was not seen on the show, but in my mind- makes sense!) as he “links up” with the troops, orbital ships, communications etc. A cyber-tank (with logo on the front) reminiscent of Warhammer 40k also fills the composition background.  I wasnt sure on the design for the tank and considered going ultra futuristic but hey, it’s cool and retro so I figured “why not? it’s working!”.  We as fans have never see them with any vehicles, which is lame for an army- right and it sort of fit the Saving Private Ryan imagery. Three Cybermats are present- can you find them?  And the Tomb of the Cybermen is the background as well as the back story.  The guys on the top catwalk are my nod to the metal miniatures I loved as a kid and my fascination with toy soldiers from my childhood- it’s fun to draw small toy sized images for me, I love to make them and look at them, and I think it’s fun for the fans as well to find them hiding in the background!  In my mind as I created this image I had the 12th Legion of Cybermen on the run from someone (Daleks, Earth, Sontarans?) from a string of battles they have lost and the 12th Cybermen Legion is now close to defeat- but they are going to get massive reinforcements here at a lost tomb of frozen Cybermen they have located to turn the tide once and for all. As Cyber Controller says- WE WILL SURVIVE.

Below is my initial 80’s artwork, a ref model sheet of the Cybermen, the first thumbnail, a composition study and layout with POV lines and the final pencils.  Enjoy! 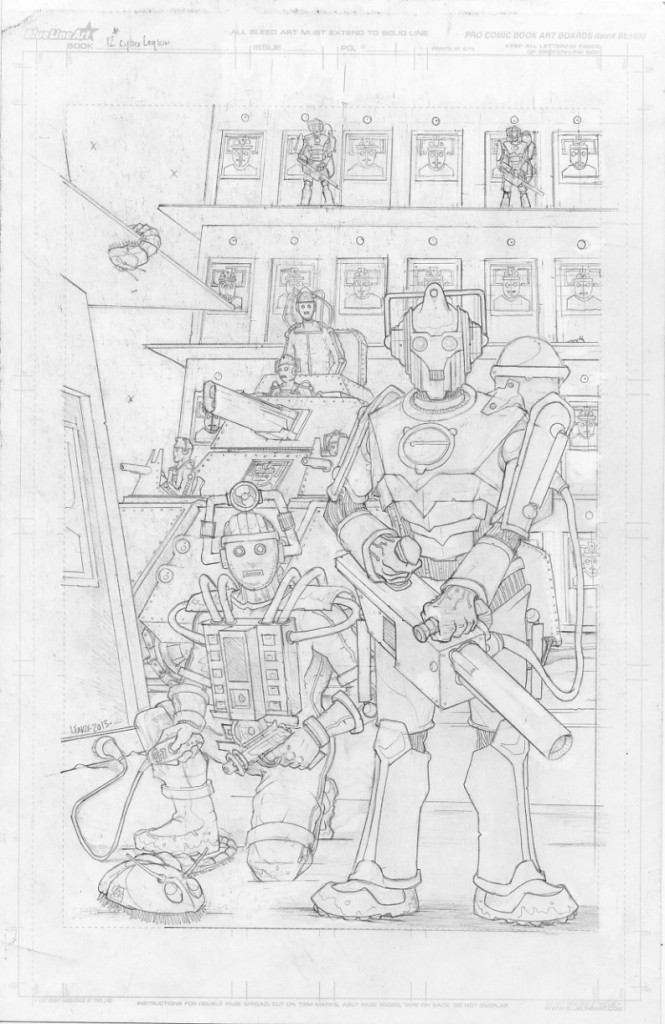 Composition and Layout for Cybermen 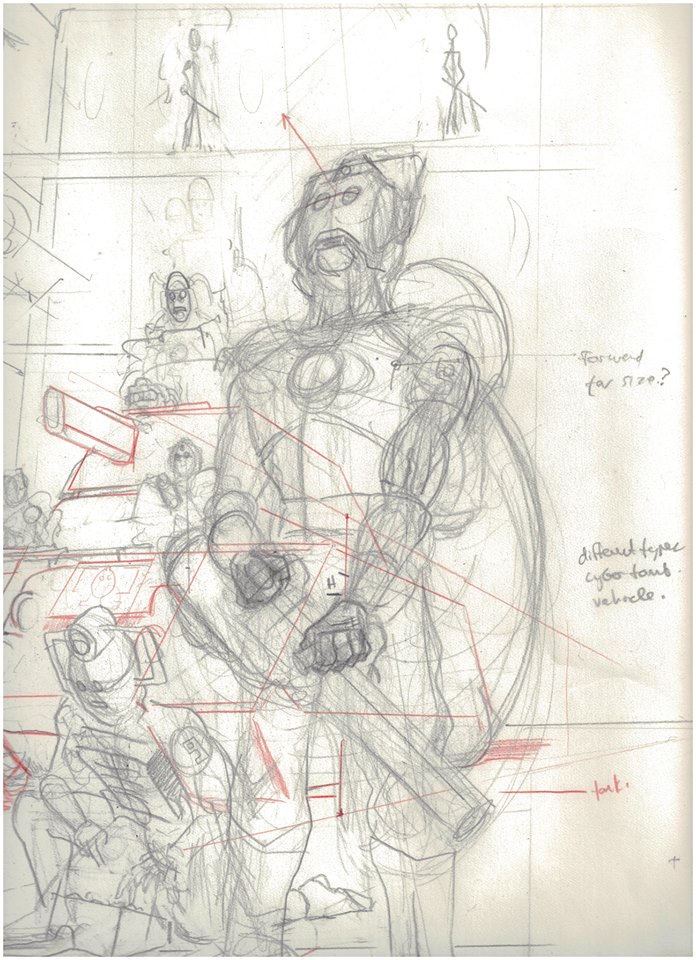 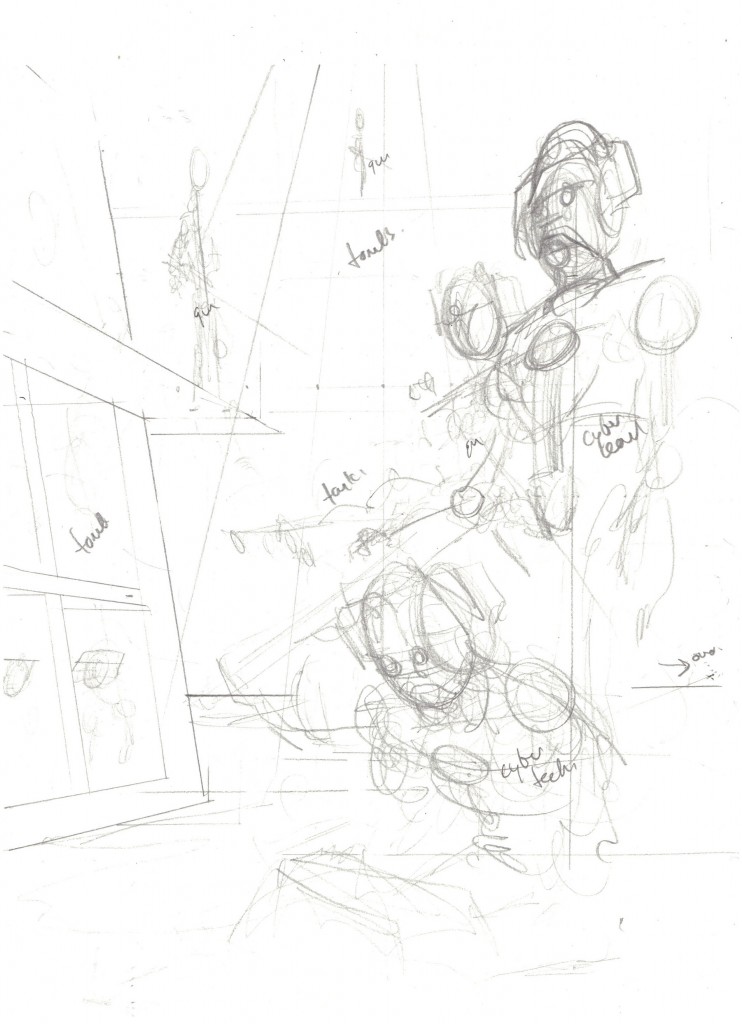 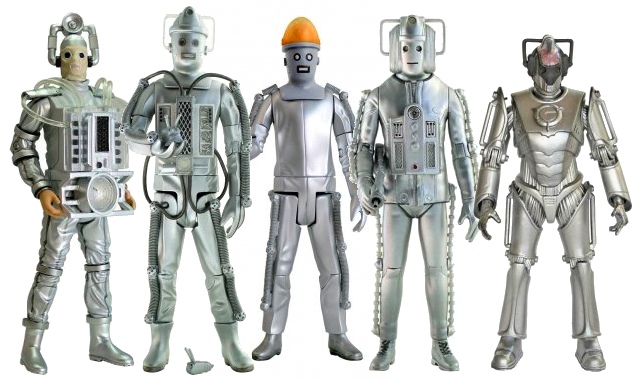 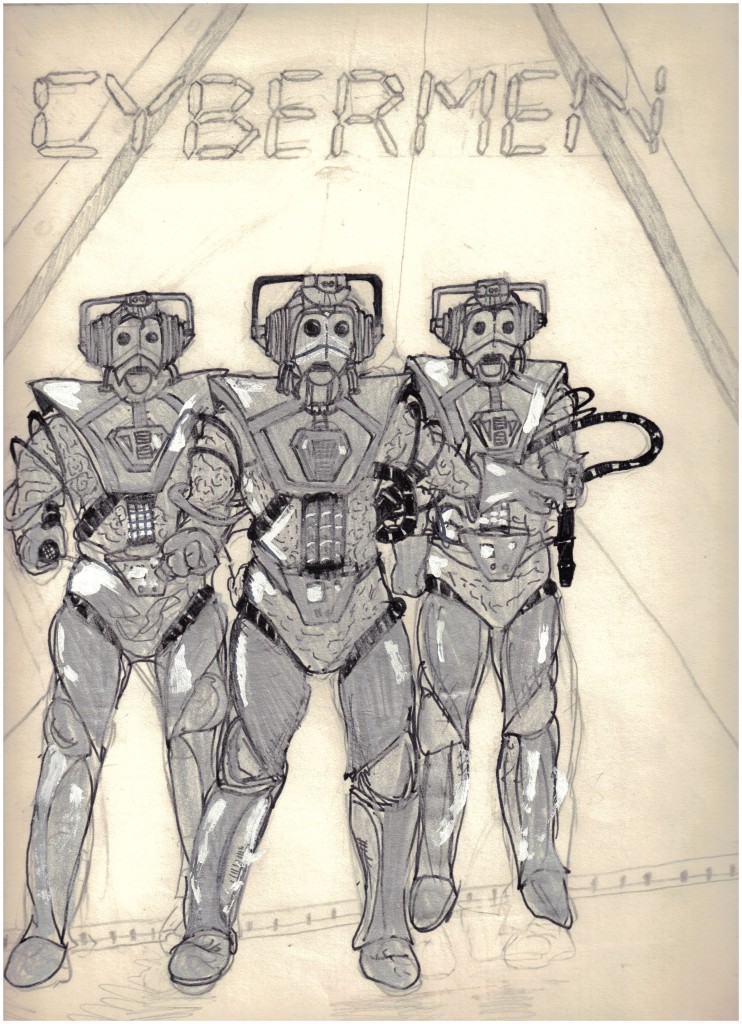 1987 colored pencil artwork from Jason Lenox of the Tomb of the Cybermen Logo. 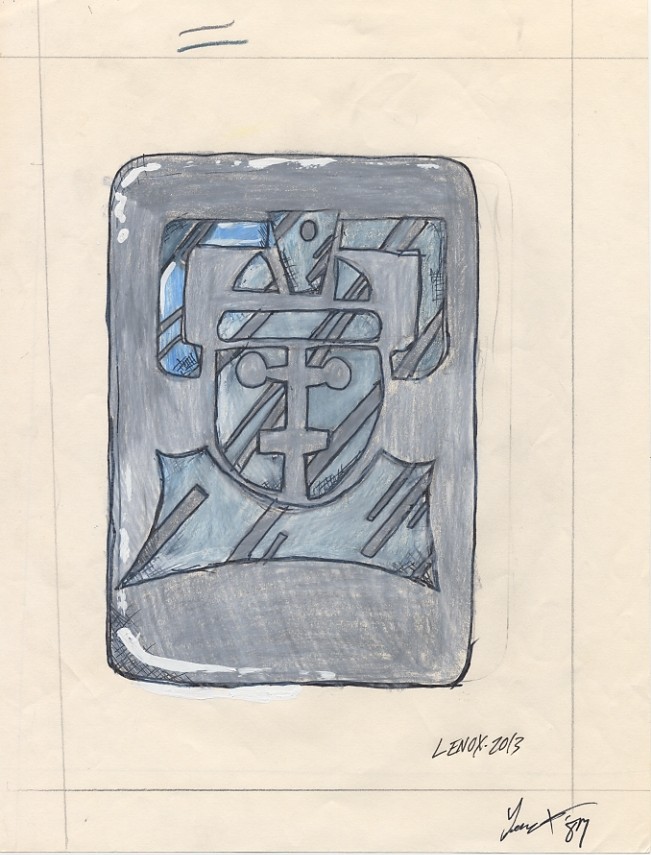