Lords of the Cosmos Page 2 Pencils

So back in October, I did the first page of LORDS OF THE COSMOS while I was in Florida on a medical emergency with my wife- you can see that page here.

After 17 other pages being done out of sequence to introduce 40+ heroes and villains from the project and two big logos, lets get back on track to page 2- a focus on the planet AIDEN, as seen from a close up over the rings of the planet.  This was a challenge to get another exciting and non repetitive view of a planet- I used some NASA photos to get away from another wide shot of the planet- from page one and the logo design. I think this panel works to move the viewer over the rings to help transition into the atmosphere.

The pages shifts to a planet side wide view shot of GEMSPIRE CITY- capitol of the civilized people of the world of AIDEN.

I took visual cues from Alex Raymond’s gorgeous cityscapes from his seminal FLASH GORDON Sunday Comics work in the 1930’s. I also took some reference from 1980’s film version of FLASH GORDON’s version of MINGO City and 1984’s ARAKEEN City from David Lynch’s adaptation of Dune. I also threw some Greek, and Egyptian architectural work into the city and I hid the Penn State University Legal building (which looks weird as hell) into the many levels of the city.  All of these sources build the DNA for Gemspire from a visual sense, but I felt I kept it very original.  At the same time, the city had to look and seem functional and have some items that will be important to the story- the pipeline system and high docking bridges for the small flying vehicles you see around the top of the city.

So without further fanfare- enjoy this fantastic set of visuals from a world a million light years from Earth! 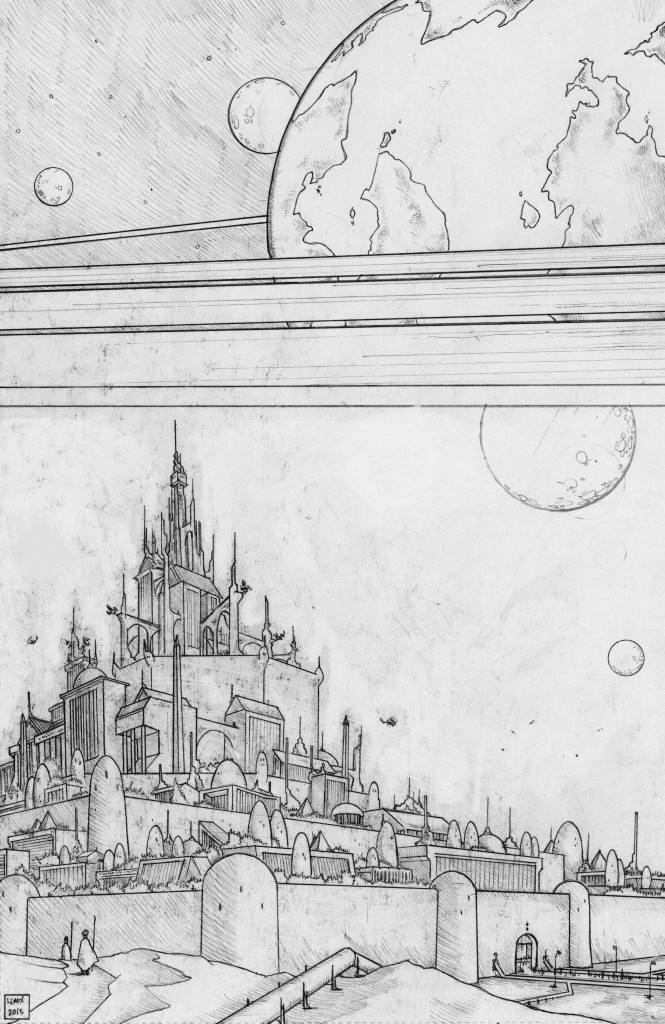