Joseph Freistuhler has been involved in both of my comics, and now as part of our UGLI STUDIOS banner he is making his own comic project called EN TENEBRES which he is currently running as a KICKSTARTER HERE. I was tapped by Joe to do a pinup, and I wanted to focus on his Demon character known as “BARRON” which Joe had some really cool character designs on.

I wanted to draw another Dragon for a while as well, so this was a great chance to shoe-horn a Hydra into the mix.  The “story” I am showing in this pinup is BARRON as a high officer in the “ARMY OF HELL” and the Hydra is BARRON’s living weapon of mass destruction.  To give the piece a setting I have BARRON and his Hydra destroying a church in the middle ages,  because what else do Demons that have Hydras with them have to do in their free time?

Visually I really wanted to make BARRON seem like a feral animal moving quickly while also showing he is really strong, and I think he really ended up looking like a fast moving creature stalking/running/crouching on that roofline.  Part of this in the thumbnails to final pencils was bulking him up and getting his head down to more of a crouch pose.  He also has really long creepy forearms as well which added to his unnatural aesthetic.  I really had fun with his chest, which after it was done reminded me of the Alien’s chest from the 1979 film of a creepy exo-skeleton which was a second sub-conscious thing.  One element you can see in my sketches was he was going to have a gorgon with a trident behind him, and this just didnt work from a layout standpoint for me, so she got dropped- I’m sure the monster union will file a complaint and protest with me.

I also really wanted to duplicate the great time I had creating my Dragon I did as a pinup for Kantara in 2012.  That piece was really fun for me, and the fans have really connected with it and I get asked frequently “WHEN IS YOUR NEXT DRAGON?” so I present the newest “Jason Lenox Dragon”.  At the same time I needed to  do it differently, so creature design wise there are three big changes with this Hydra to the 2012 Dragon

#1 Three odd heads with different outcropping and features as well as breathing fire.  I wanted to make these heads less natural and more freakish to show they had “Hellish” origins.  I also felt like I channeled some old school Godzilla monster into the heads  the center head sort of looked like a Godzilla foe (KAIJU!!!) that had a big knife for a head I liked as a kid- I realized this after the fact, so it was a second sub-conscious thing.

#2 The Hydra has blank “dead” eyes which I pattered after deep see fish that don’t see much light- thus just white plates with no pupils.  The blank eyes always were an element that creeped me out, whereas the 2012 Dragon looks smart and cunning like a crocodile, the Hydra just looks like a mindless killer- again, it’s Hellish origins as a slave creature made by Demons like Barron to just wage war and cause indiscriminate destruction on Earth go along with this visual cue.

#3- The snake like body on the Hydra as opposed to the turtle like legs and the stout body from the prior Dragon.  The lack of legs all adds to the malformed/un-earthly/hellish look I was working to achieve with Barron and the Hydra.

Visually the final element that just worked was the cross on the building, it was sort of a tribute to when Todd McFarlane made comics- he loved throwing that as a visual element into SPIDERMAN as well as SPAWN- I always loved his work and am still inspired by his ability to make things look fabulous, so with Demons running on a church roofline, I felt it was a fun wink and a nod to fans of Todd’s work from me to them.

Here are the final pencils, my thumbnails and Joe’s original Character Designs for BARRON. 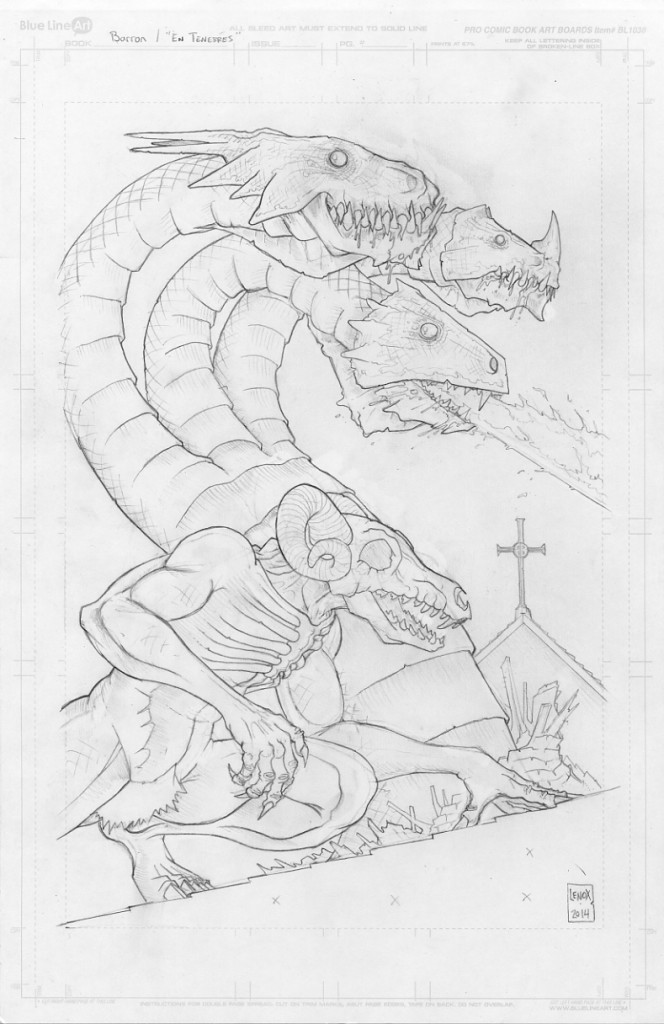 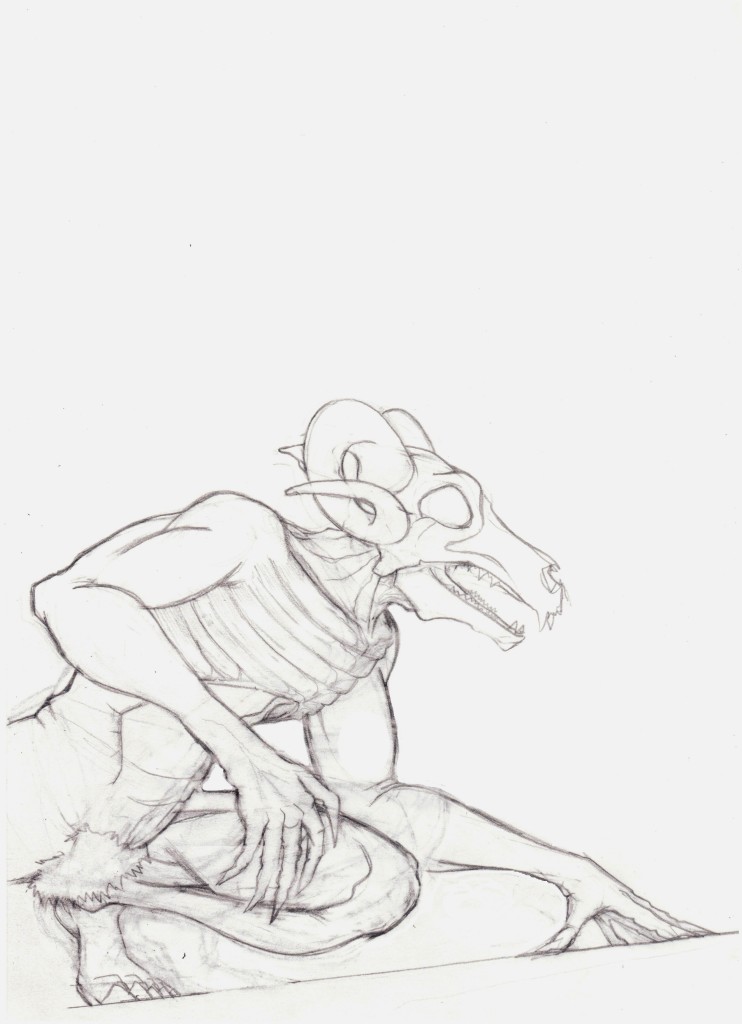 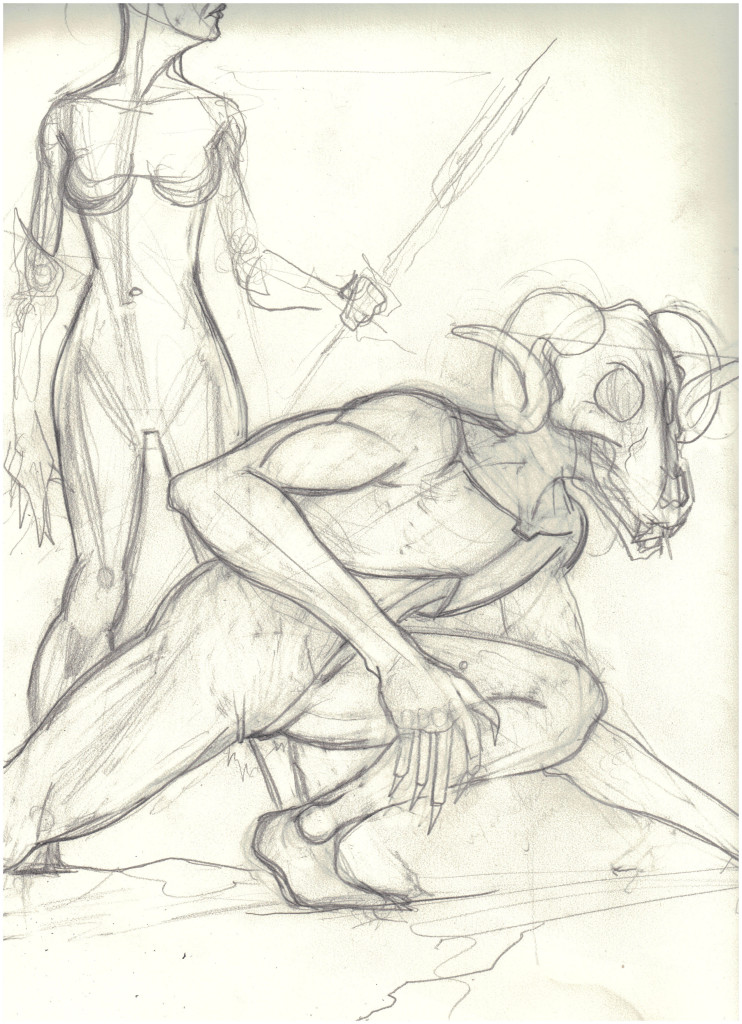 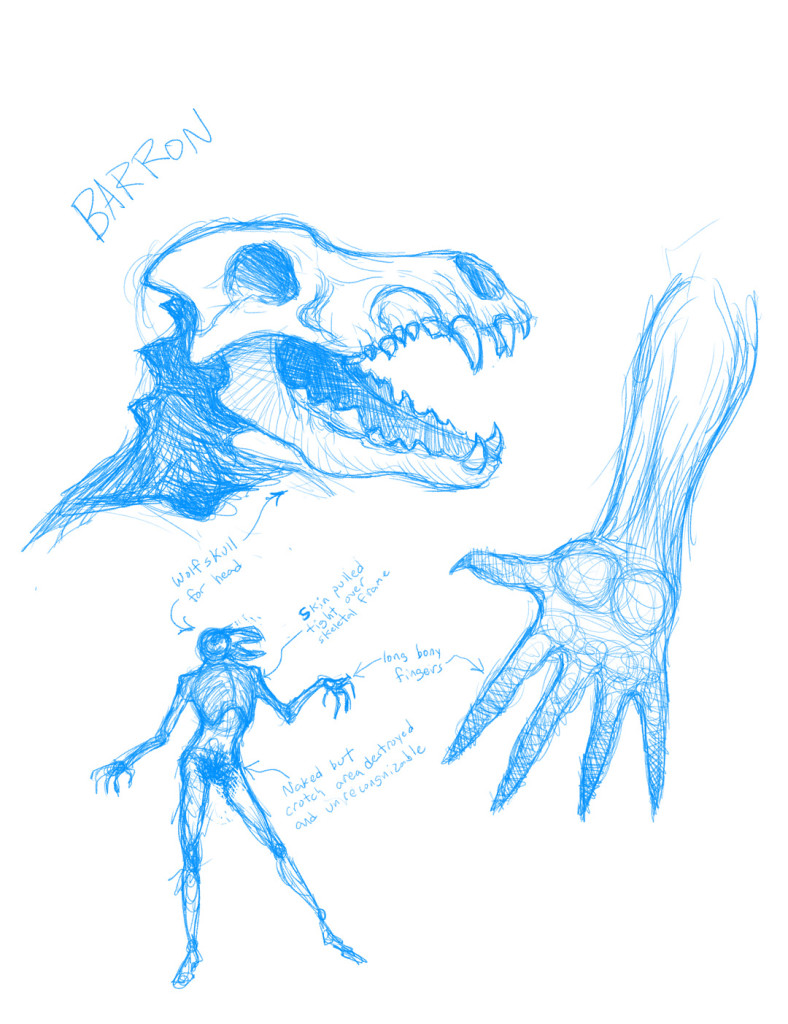 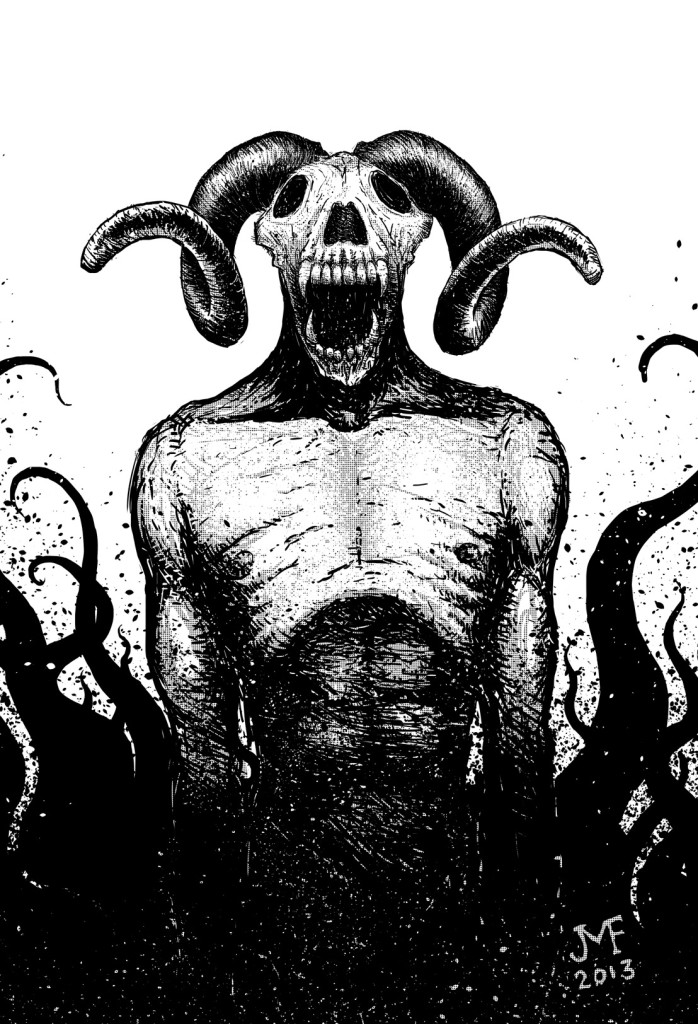