So here I am done with the latest comic and…. a left turn on the horizon.

A new foray into “fan art” for a bit- I wanted to get some more appealing mainstream prints for people to buy from me at cons, and to get some additional attention to my work.  So in the words of my fellow artist Mikey Wood, “Sell out a bit!”- so here I am, selling out for fandom. Don’t worry, I’ll survive, with a few more bucks in my pocket to boot, and much more killer portfolio and better prints to sell at shows!

So where to start?

A rarely seen topic at cons and fandom in general- DR. WHO VILLAINS… and first off-The DALEKS!!  Despite the popularity of the show in the last 5 years, I really dont see the awesome villains from this show getting any really great artwork out there (ok ok, Bob Hack rules… but who else?)

Engaged in combat on a foreign world, battle damaged and fighting for the EXTERMINATION of all enemies of the DALEK EMPIRE the DALEK Army fights on to VICTORY!

Lest you think my new love for the Daleks and Dr. Who is not true, I give you this bit of time travel….

At bottom is my old school 12 year old Dalek art from 1987- whoa flashbacks!  And who says a child cant love fascist cyborgs?  Sadly, I bet the folks at conventions would buy this artwork, but that’s another rant for another day!

So back to the artwork at hand.

The middle piece is my 2013 thumbnail and then my final 2013 pencils, for the project… I really pleased with this whole layout and composition, but I must say drawing these guys is WAY harder than you think- those little balls on the skirt- what a freaking PAIN!!  But it looks how I wanted it to turn out!  Really looking forward to the inks on this one!  The theme for this was the Daleks in a “Saving Private Ryan” style attack, lets see these robotic mutant cyborgs actually in a battle for once!

Having not watched the show since the 80’s- Ive been catching up on the Daleks in their post 2005 re-launch, and needless to say, Im not pleased with their insane power up from the classic Pertwee/Baker episodes. In my humble opinion, the …super-powered/ forcefield/ taking on 5 million Cybermen with 4 Daleks is just silly. These guys are small armored tanks, but with an RPG, the right laser, Movellan Bomb or an anti-tank mine, you should be able to take one out- right?

I did find an amazing video here of an anime Dr. Who, it is the best Who Ive ever seen on screen, and it got me really inspired for this piece and a whole line of pinups of my favorite Dr. Who Villians!

Since all of the Dalek art I see online and at shows is not action oriented, and you rarely see a damaged Dalek, Im peeling it back to show one on the front lines, destroyed, even the little Dalek mutant inside is trying to get out from the wreckage- would the other Daleks save it? I found some awesome FASA Rpg tech specs from 1985 online (yeah I used to have that stuff back when I watched the show on PBS) on the inner mechanics of the Daleks to flesh it out, and added a Dalek Drone, Dalek on their floating platform, and a Heavy Weapon Dalek to fill out the image. Enjoy, Ill be working on this at Baltimore Comic Con 9/7-9/8 at table A-196 (hint hint!), so stop in and say “Hello”!! Jelly Babies are welcome. 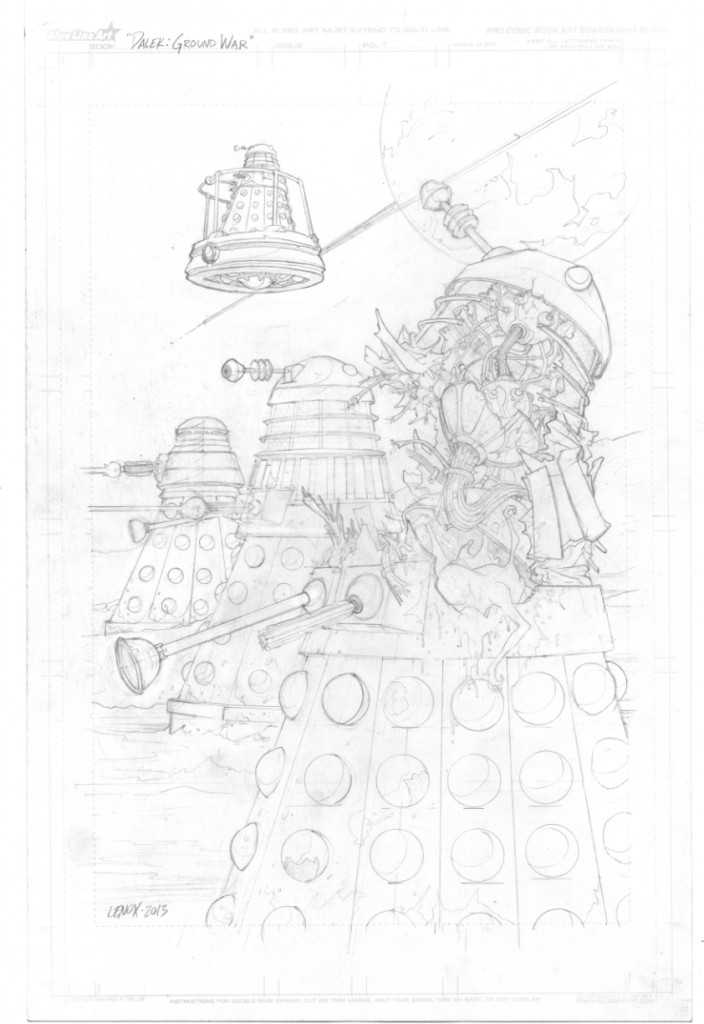 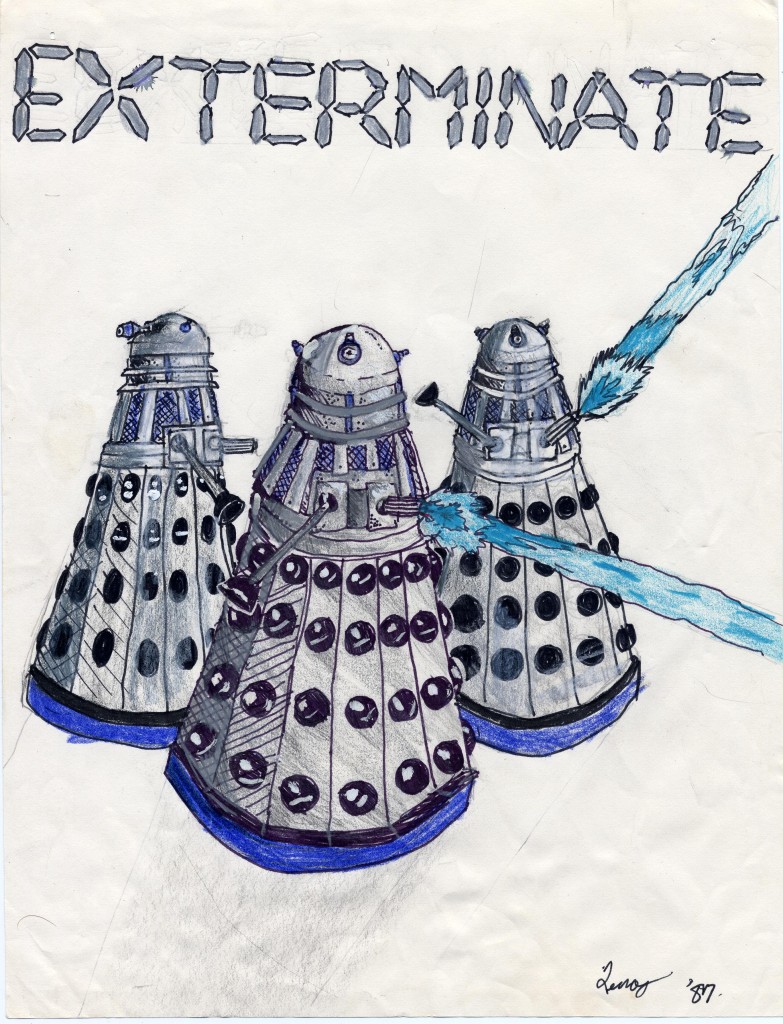